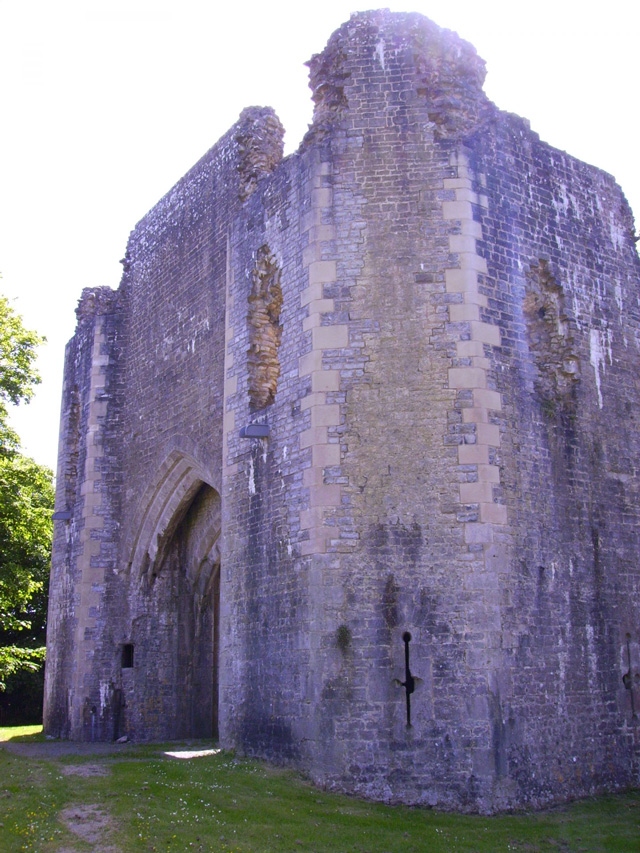 Location: Llanblethian, Cowbridge, Wales.
Built: 14th century.
Condition: Ruined
Ownership / Access: Cadw.
Notes: St Quintins Castle (also known as St Quentins Castle and Llanblethian Castle) is a castle located in the village of Llanblethian, Cowbridge, Wales under the care of Cadw. Around 1102 Robert Fitzhamon, the first Norman Lord of Glamorgan bequeathed the lands of Llanblethian as a lordship to Herbert de St Quentin who is thought to have built the first fortification at the site of the castle. This initial construct was believed to have been a simple ringwork defence with timber walls, a bank and ditch. A rectangular stone keep was built in the late 12th century, whose remains can now be found within the later gatehouse. This keep may have replaced a similar wooden structure.The lordship remained with the St Quentin family until 1233 when the land was seized by Richard Siward, but he then lost it to Earl Richard de Clare in 1245. Richard de Clare seized large areas of this part of Glamorganshire, from Cowbridge to Llantrisant, but it was his grandson, Earl Gilbert de Clare, who began to build the stone structure of St Quintins Castle which stands today. This was thought to have been roughly after 1307, but Gilbert de Clare was killed in the Battle of Bannockburn in 1314 before the castle was completed. Modern historians believe that the lack of inner courtyard buildings and the weakness of the curtain wall points to the hypothesis that the castle was never fully completed. The castle itself is a rectangular stone walled enclosure, roughly 64 metres East to West. The walls are roughly 120 centimetres in thickness. It is set on a spur above steep slopes on all sides apart from the East side. The weak East side of the fortification is protected by a twin-tower gatehouse and a further two towers East entrance facade. The best defensive side is the southern side which falls away sharply to the River Thaw. It was reported as being ruinous by 1741.

How To Get To St Quintins Castle (Map):