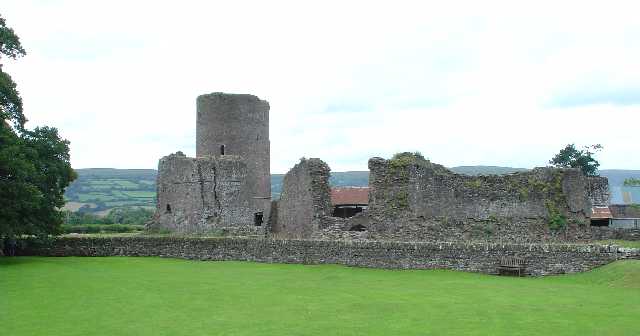 Location: Tretower, Powys.
Built: 12th century.
Condition: Ruined.
Ownership / Access: Cadw.
Notes: Tretower castle is a castle in the village of Tretower in the county of Powys, Wales. Tretower (Welsh: Gastell Tretwr) was founded as a motte and bailey castle. In the 12th century, a shell-keep was added to the motte. By c.1230 a tall cylindrical keep was added to the inside of the shell-keep and the space between was roofed over. At this time the earlier bailey was walled in stone and provided with cylindrical corner towers. In the early 14th century residential buildings were constructed away from the original fortifications forming today's Tretower Court. Over time the lords of Tretower favoured the more luxurious Court and the castle fell into disuse. The castle is roughly triangular in plan, with the motte and keep assemblage occupying the western corner. The 12th century shell-keep is an irregular enclosure with a gate-tower on the line of approach from the bailey. In the centre of the shell stands the tall cylindrical 13th century keep. The keep is of three stories, with an original entrance at first floor level, above a strong, slanted batter or talus. The top of the talus is marked by a decorative string-course of stone. The keep is a rare example of a cylindrical keep in the British Isles. Interestingly the surrounding region has a number of examples of this type, for example at Skenfrith, Bronllys and Pembroke. The Tretower keep and the others share similarities with contemporary French models such as Dourdan.

How To Get To Tretower Castle (Map):