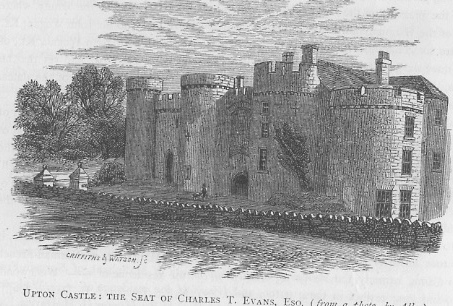 A view of Upton Castle in 1872, after enlargement and alterations Photo - Thomas Nicholls - Wikipedia - lic. under Public Domain

Location: Cosheston, Pembrokeshire in Wales.
Built: 13th century.
Condition: Intact.
Ownership / Access: Private,
Notes: Upton Castle is believed to have been built in the 13th century and stands close to a creek of the Carew River on land held by the Earls of Pembroke. The original holders were the Norman Malefant family, in whose hands it remained until the 16th century when it passed to the Bowen family. In the late 18th century, the house and estate were sold to John Tasker, although Nicholas Carlisle described the building in 1811 as "now in ruins". Between 1828 and 1860 there were considerable alterations to the building, including the insertion of a new door and the construction of two large wings. Management of the gardens, which had been substantially improved in the early 20th century, was taken over by the Pembrokeshire Coast National Park and opened to the public in 1976. However, the park authority later withdrew their funding and since the property changed hands in 2007, the new owners and a team of volunteers have restored and reopened the gardens. In the summer of 2012, the castle was investigated by a team of archaeologists from the Channel 4 television series Time Team, which confirmed that the chapel pre-dated the castle.

How To Get To Upton Castle (Map):