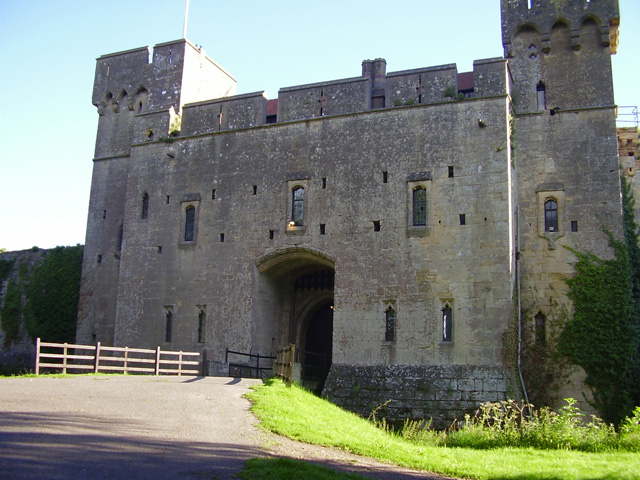 Location: Caldicot, Monmouthshire, in southeast Wales.
Built: 1100.
Condition: Intact.
Ownership / Access: --
Notes: Caldicot Castle (Welsh: Castell Cil-y-coed) is an extensive stone medieval castle in the town of Caldicot, Monmouthshire, in southeast Wales, built near the site of Harold Godwinson's former Saxon castle by the Norman earls of Hereford from about 1100. The castle became a Grade I listed building on 10 June 1953. It was in the possession of Thomas of Woodstock, a son of King Edward III of England, until his death in 1391, when it reverted to the Crown.Caldicot Castle was evidently neglected, fell into ruin and became little more than a farmyard. The castle was sold to Charles Lewis of St Pierre in 1857. In 1885 he sold it to Joseph Richard Cobb, who began the restoration of the castle as his family home. From 1885 to 1964, the Cobb family owned the castle. Joseph Cobb's family remained at the castle after his death and it was his son Geoffrey Wheatly Cobb, and in particular his daughter-in-law Anna, who continued the work of restoration. In the early twentieth century, many rooms were decorated with memorabilia from Nelson's first flagship, HMS Foudroyant which was owned by G. Wheatly Cobb at the end of its life. G. Wheatly Cobb died in 1931 and, after Anna's death in 1943, the castle passed to Joseph's grandson, Geoffrey Cobb who created furnished apartments for renting in three of the towers and also in parts of the gatehouse. In 1964, Chepstow Rural District Council bought the castle from the Cobb family for £12,000, at a time when the increasing availability of council housing had supplanted the local need for the castle apartments. The building, including a small museum, was opened to the public in 1965. After 1967, medieval-style banquets were held there.

How To Get To Caldicot Castle (Map):