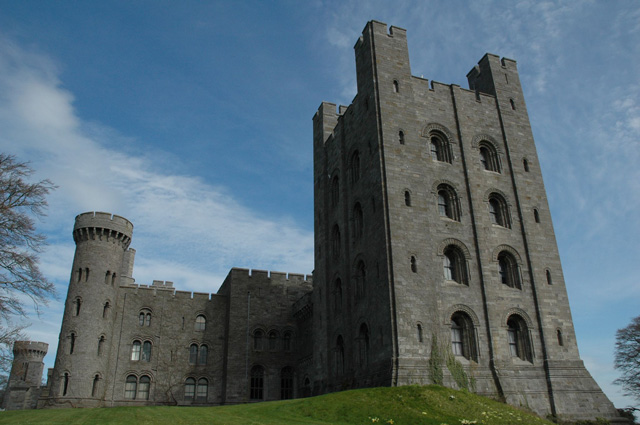 Location: Llandegai, Bangor, Gwynedd, North Wales.
Built: 1822 and 1837.
Condition: Intact.
Ownership / Access: National Trust.
Notes: Penrhyn Castle is a country house in Llandegai, Bangor, Gwynedd, North Wales, in the form of a Norman castle. It was originally a medieval fortified manor house, founded by Ednyfed Fychan. In 1438, Ioan ap Gruffudd was granted a licence to crenellate and he founded the stone castle and added a tower house. Samuel Wyatt reconstructed the property in the 1780s. The present building was created between about 1822 and 1837 to designs by Thomas Hopper, who expanded and transformed the building beyond recognition. However a spiral staircase from the original property can still be seen, and a vaulted basement and other masonry were incorporated into the new structure. Hopper's client was George Hay Dawkins-Pennant, who had inherited the Penrhyn estate on the death of his second cousin, Richard Pennant, who had made his fortune from Jamaican sugar and local slate quarries. The eldest of George's two daughters, Juliana, married Grenadier Guard, Edward Gordon Douglas, who, on inheriting the estate on George's death in 1845, adopted the hyphenated surname of Douglas-Pennant. Penrhyn is one of the most admired of the numerous mock castles built in the United Kingdom in the 19th century; Christopher Hussey called it, "the outstanding instance of Norman revival." The castle is a picturesque composition that stretches over 600 feet from a tall donjon containing family rooms, through the main block built around the earlier house, to the service wing and the stables.It is built in a sombre style which allows it to possess something of the medieval fortress air despite the ground-level drawing room windows. Hopper designed all the principal interiors in a rich but restrained Norman style, with much fine plasterwork and wood and stone carving. The castle also has some specially designed Norman style furniture, including a one-ton slate bed made for Queen Victoria when she visited in 1859. Hugh Napier Douglas-Pennant, 4th Lord Penrhyn, died in 1949, and the castle and estate passed to his niece, Lady Janet Pelham, who, on inheritance, adopted the surname of Douglas-Pennant. In 1951 the castle and 40,000 acres (160 km²) of land were accepted by the Treasury in lieu of death duties from Lady Janet. It now belongs to the National Trust and is open to the public. Penrhyn's attractions include a formal walled garden, extensive informal gardens, an industrial railway museum, a model railway museum and an adventure playground. Hanging on its walls is one of the finest art collections in North Wales, with works by artists such as Rembrandt - (Catrina Hooghsaet, valued at up to £40m, the Dutch Culture Ministry tried to buy the painting for Amsterdam's Rijksmuseum in 2007 but couldn't meet the asking price)- , Canaletto, Richard Wilson, Carl Haag, Perino del Vaga and Palma Vecchio. The family began collecting paintings from the early years of the 19th century; this significant collection was catalogued by the 2nd Lord Penrhyn's daughter Alice Douglas-Pennant. The castle has views over the Snowdonia mountains. In 2008/09 it was the National Trust's thirteenth most visited paid-entry property, with 156,575 visitors.

How To Get To Penrhyn Castle (Map):