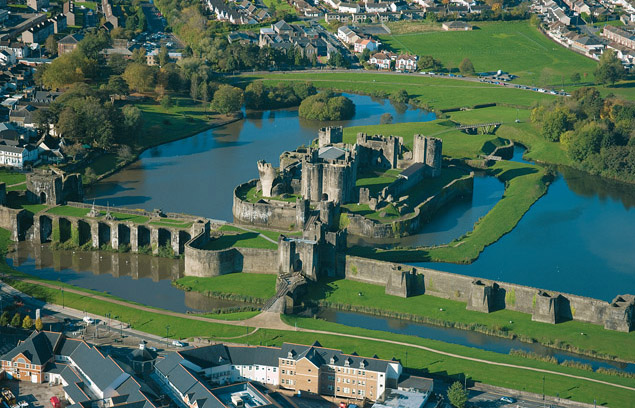 Location: Caerphilly County Borough, Wales.
Built: 1268-1290.
Condition: Ruins.
Ownership / Access: Cadw.
Opening Times: Check their website for more info.
Price of Admission: Check their website for more info.
Notes: Caerphilly Castle (Welsh: Castell Caerffili) is a medieval fortification in Caerphilly in South Wales. The castle was constructed by Gilbert de Clare in the 13th century as part of his campaign to conquer Glamorgan, and saw extensive fighting between Gilbert and his descendants and the native Welsh rulers. Surrounded by extensive artificial lakes - considered by historian Allen Brown to be "the most elaborate water defences in all Britain" - it occupies around 30 acres (12 ha) and is the second largest castle in Britain.[1] It is famous for having introduced concentric castle defences to Britain and for its large gatehouses. Gilbert began work on the castle in 1268 following his occupation of the north of Glamorgan, with the majority of the construction occurring over the next three years at a considerable cost. The project was opposed by Gilbert's Welsh rival Llywelyn ap Gruffudd, leading to the site being burnt in 1270 and taken over by royal officials in 1271. Despite these interruptions, Gilbert successfully completed the castle and took control of the region. The core of Caerphilly Castle, including the castle's luxurious accommodation, was built on what became a central island, surrounding by several artificial lakes, a design Gilbert probably derived from that at Kenilworth. The dams for these lakes were further fortified, and an island to the west provided additional protection. The concentric rings of walls inspired Edward I's castles in North Wales, and proved what historian Norman Pounds has termed "a turning point in the history of the castle in Britain". The castle was attacked during the Madog ap Llywelyn revolt of 1294, the Llywelyn Bren uprising in 1316 and during the overthrow of Edward II in 1326-27. In the late 15th century, however, it fell into decline and by the 16th century the lakes had drained away and the walls were robbed of their stone. The Marquesses of Bute acquired the property in 1776 and under the third and fourth Marquesses extensive restoration took place. In 1950 the castle and grounds were given to the state and the water defences were re-flooded. In the 21st century, the Welsh heritage agency Cadw manages the site as a tourist attraction.

How To Get To Caerphilly Castle (Map):