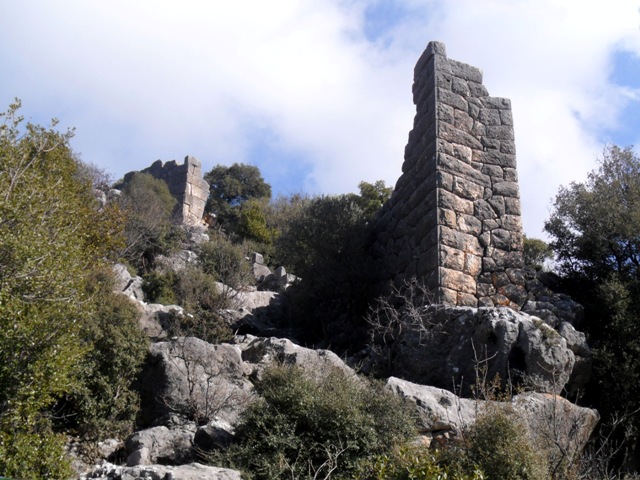 Location: Mersin Province,Turkey.
Built: --,
Condition: ruin.
Ownership / Access: --
Notes: Mancinik Castle (Turkish: Mancinik Kale) is a Hellenistic castle ruin in Mersin Province, Turkey.The castle is situated in Silifke district of Mersin Province, at 36�31'N 34�03'E, about 10 kilometres (6.2 mi) bird's flight to Mediterranean Sea. Visitors to the site follow the road from Narlikuyu and Cennet to north . The last 500 metres (1,600 ft) of the course which detaches from the road to east is actually a rough path. The castle is situated on the clift which overviews the Seytanderesi canyon to the east. Adamkayalar (which is historically unrelated to the castle) is situated 7 km southeast in the east wall of the canyon.The first archaeological research of the site has been carried out by Levent Zoroglu in 1987.[1] The walls are made of polygonal shaped stones, a characteristis of Hellenistic architecture. Also there are few inscriptions. Although these are mostly erased a few words could be read. Hellenistic origin is also confirmed by a decrypted word oikodomos .