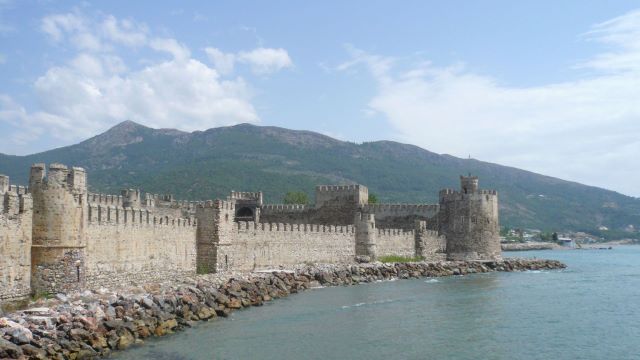 Location: Anamur, Mersin Province, Turkey.
Built: 1221,
Condition: Mostly standing.
Ownership / Access: --
Notes: Mamure Castle (Turkish: Mamure kalesi) is a medieval castle in the Anamur District of Mersin Province, Turkey.The castle was built by the rulers of the Armenian Kingdom of Cilicia on the foundations of a fourth-century Roman castle.[1] Designed to protect against pirates, it was repaired during the Byzantine era and during the Crusades. When Alaattin Keykubat I of Seljuk Turks captured the ruins of the castle in 1221, he built a larger castle using elements of the earlier fortifications. Later, it was controlled by the Karamanid dynasty (who ruled a Turkish state in Anatolia). Although the exact date is uncertain, according to an inscription by Ibrahim II of Karaman in 1450, the castle was captured during Mahmut's reign (1300�1311). The castle was renamed as Mamure (prosperous) after repairs by Mahmut.[2] In 1469, the castle was annexed by the Ottoman Empire. It was subsequently repaired in the 15th, 16th and 18th centuries and a part of the castle was used as a caravansarai.