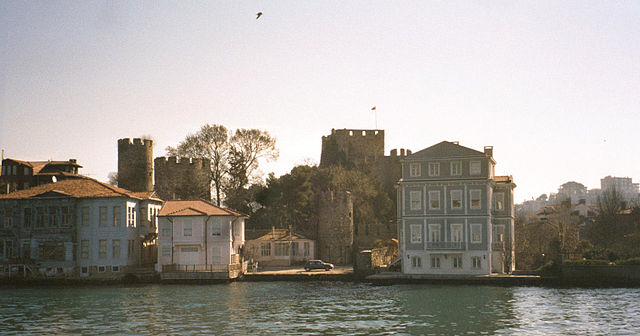 Location: Istanbul, Turkey.
Built: 1393 and 1394,
Condition: Ruined.
Ownership / Access: --
Notes: Anadoluhisari (English: Anatolian Castle) is a fortress located in Istanbul, Turkey on the Anatolian (Asian) side of the Bosporus, which also gives its name to the quarter around it. It was built between 1393 and 1394 by the Ottoman sultan Bayezid I "The Thunderbolt" as part of his preparations for the Second Ottoman Siege of Constantinople, which took place in 1395. Sultan Bayezid built it on the ruins of a temple of Uranus Originally named G�zelcehisar (Turkish: Beauteous Castle) Anadoluhisari, constructed on an area of 7,000 m�, is situated at the narrowest point with 660 m of the Bosporus strait and next to a creek named G�ksu (Ancient Greek: Aret�s). The Fatih Sultan Mehmet Bridge, the second bridge spanning Bosporus, is located just north of the fortress. Another fortress, Rumelihisari, was built between 1451 and 1452 by Sultan Mehmed II opposite of Anadoluhisari on the European side in order to obtain absolute control over the sea traffic of the Bosporus Strait, which was especially vital for the Genoese in Galata, who were allied with the Byzantines and had colonies in the Black Sea such as Caffa, Sinop and Amasra. Anadoluhisari was erected as a watch fort. It has a 25 m high, quadratic main tower within the walls of an irregular pentagon with five watchtowers at the corners. There is a masjid in the fortress. It is the oldest Turkish architectural structure built in Istanbul. The fortress was named "G�zelce Hisar" in historical documents. Sultan Mehmed II reinforced the fortress with a 2 m thick wall around it, which had three watchtowers. Some extension buildings like warehouse and houses were added as well. Due to changes made in the past, it no longer retains its original appearance. Following the conquest of Constantinople, it served as a military prison. The Turkish Ministry of Culture restored the site in 1991 - 1993. Today, this small fort creates a picturesque appearance with the old wooden houses leaning to its walls and its surroundings. Anadoluhisari is a museum (historical site), but not open to public.