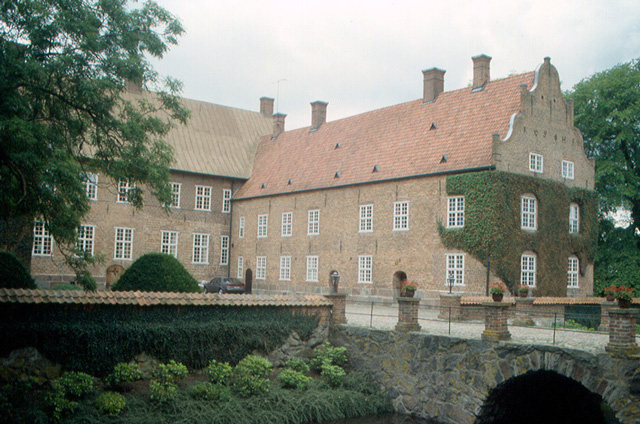 Location: Kristianstad Municipality, Sweden.
Built: 17th century.
Condition: Intact.
Ownership / Access: Private residence. Count Hans-Gabriel Trolle-Wachtmeister and his wife Countess Alice Trolle-Wachtmeister
Notes: Trolle-Ljungby Castle (Swedish: Trolle-Ljungby slott) is a castle in Kristianstad Municipality, Scania, in southern Sweden. The Renaissance style castle is enclosed by a moat.The castle is of medieval origins. It is mentioned mentioned as belonging to the Danish noble "Bille" family during the 14th and 15th centuries. In the 1460s, it was sold to Jens Holgersen Ulfstand, a Danish politician, admiral and county governor, who is famous for having commissioned the building of Glimmingehus, one of the best-preserved medieval manors in Scandinavia. Little is known about the early history of the castle, but the western part is thought to be the oldest. Large reconstruction works were carried out after 1621 and it was at this time that the current Renaissance exterior was conceived. A drawing suggest that by 1680 the castle was more or less the same shape as it is now. In the wake of the Swedish conquest of Scania from Denmark and the following Scanian War, the castle was involved in the fighting and damaged by raiding Snapphanar or guerrilla fighters. Bullet holes and cutting marks in the tower door, from this conflict, are still visible. In the following years the castle was repaired and a defensive gate house was built. The castle park was visited by Carl Linnaeus in 1749. In 1850 the house came into the possession of Hans Gabriel Trolle-Wachtmeister, the ancestor of the current owners, who initiated reconstruction works both internally and externally. The current owners of the castle are Count Hans-Gabriel Trolle-Wachtmeister and his wife Countess Alice Trolle-Wachtmeister, the Swedish Mistress of the Robes.

How To Get To Trolle-Ljungby Castle (Map):