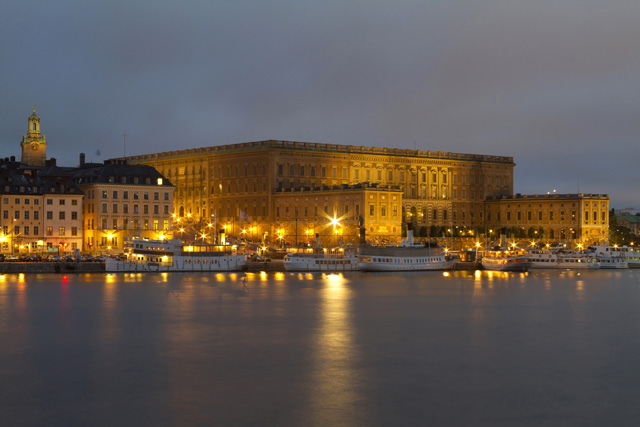 Location: Stockholm, Sweden.
Built: 1697.
Condition: Intact.
Ownership / Access: The Swedish State through the National Property Board of Sweden. Offices of the head of state.
Opening Times: Check their website for more info.
Price of Admission: Check their website for more info.
Notes: Stockholm Palace or The Royal Palace (Swedish: Stockholms slott or Kungliga slottet) is the official residence and major royal palace of the Swedish monarch (the actual residence of King Carl XVI Gustaf and Queen Silvia is at Drottningholm Palace). Stockholm Palace is located on Stadsholmen, in Gamla stan in the capital, Stockholm. It neighbours the Riksdag building. The offices of the King, the other members of the Swedish Royal Family, and the offices of the Royal Court of Sweden are located here. The palace is used for representative purposes by the King whilst performing his duties as the head of state. This royal residence has been in the same location by Norrstrom in the northern part of the Gamla stan in Stockholm since the middle of the 13th century when the Tre Kronor Castle was built. In modern times the name relates to the building called Kungliga Slottet. The palace was designed by Nicodemus Tessin the Younger and erected on the same place as the medieval Tre Kronor Castle which was destroyed in a fire on 7 May 1697. Due to the costly Great Northern War which started in 1700, construction of the palace was halted in 1709, and not recommenced until 1727- six years after the war. When Tessin the Younger died in 1728, the palace was completed by Carl Harleman who also designed a large part of its Rococo interior. The palace was not ready to use until 1754, when King Adolf Frederick and Queen Louisa Ulrika moved in, but some interior work proceeded until the 1770s. No major conversions have been done in the palace since its completion, only some adjustments, new interiors, modernization and redecorating for different regents and their families, coloration of the facades and addition of the palace museums. The palace is surrounded by the Lejonbacken and the Norrbro to the north, the Logarden (known as the Shot Yard in English) and Skeppsbron in the east, the Slottsbacken and the Storkyrkan in the south and the outer courtyard and Hogvaktsterrassen in the northwest. As of 2009 the interior of the palace consists of 1,430 rooms of which 660 have windows. The palace contains apartments for the Royal families, representation and festivities such as the State Apartments, the Guest Apartments and the Bernadotte Apartments. More features are the Hall of State, the Royal Chapel, the Treasury with the Regalia of Sweden, Livrustkammaren and the Tre Kronor Museum located in the remaining cellar vaults from the former castle. The National Library of Sweden was housed in the northeast wing, the Biblioteksflygeln (the Library Wing), until 1878. As of 2014 it houses the Bernadotte Library. The Slottsarkivet is housed in the Chancery Wing. In the palace are the offices of the Royal Court of Sweden, a place of work for approximately 200 employees. The Royal Guards has guarded the palace and the Royal Family since 1523. A comprehensive renovation of the facade began in 2011, to repair weather damaged parts made from sandstone. The repairs are estimated to cost approx. 500 million crowns during a period of 22 years. The Royal Palace is owned by The Swedish State through the National Property Board of Sweden which is responsible for running and maintaining the palace, while the Stathallarambetet (the Office of the Governor of the Royal Palaces) manages the royal right of disposition of the palace.

How To Get To Stockholm Palace (Map):