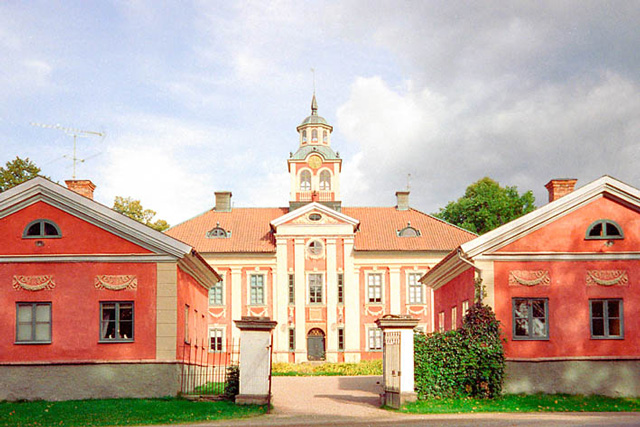 Location: Gotene Municipality, Sweden.
Built: 1660s.
Condition: Intact.
Ownership / Access: Virgin family. Private residence.
Notes: Mariedal Castle is a castle in Sweden. Written accounts and the weather vane indicate the castle was built in 1666. The splendid interior of the castle provides stucco ceiling and wainscoting. A portrait collection of the Sparrerska family is displayed there. This manor was called Sorbo and the valley upstream is still called Sorbo Valley. In the middle of the 17th century Magnus Gabriel De la Gardie acquired the manor. On these grounds the present castle with two wings was erected. The castle was named after Magnus Gabriel's wife Maria Euphrosyne, the sister of King Karl X. It has been commonly assumed that Jean De la Valle was responsible for the design. There are many obvious similarities between Mariedal and other structures designed by De la Valle, in particular the Riddarhuset (House of Knights) in Stockholm, however, there is yet no proof of any connection between the buildings. Mariedal is now owned by the Virgin family and is counted as one of Vastergotland's finest castles.

How To Get To Mariedal Castle (Map):