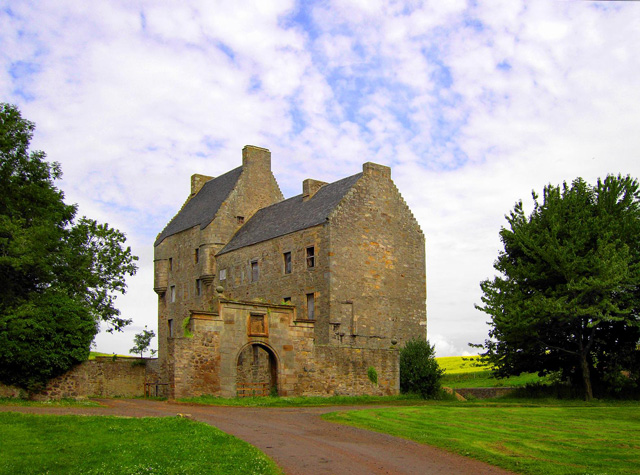 Location: Edinburgh, West Lothian, Scotland.
Built: 16th century.
Condition: Intact.
Ownership / Access: --
Notes: Midhope Castle is a 16th century tower house in Scotland. It is situated in the hamlet of Abercorn on the Hopetoun estate, About 4 kilometres (2.5 mi) to the west of South Queensferry, on the outskirts of Edinburgh. It is located at grid reference NT072786. The derelict chateau that can be seen today represents the much-altered 5 storey, oblong tower house. In 1678 Midhope was given a facelift, when an entrance tower was removed and the extension to the east was heightened and extended. A new doorway was added along with a small courtyard, measuring 114 by 61 feet (35 by 19 m), to the south. During the latter sixteenth century the castle belonged to Alexander Drummond of Midhope, brother to Robert Drummond of Carnock, Master of Work to the Crown of Scotland. A stone inscribed 'AD 1582 MB' commemorates Alexander and his wife Marjory Bruce. A painted ceiling from the tower survives in the care of Historic Scotland at Edinburgh. It includes cinquefoil motifs and probably commemorates the marriage of Sir Robert Drummond, who became laird in 1619, to a Hamilton heiress. The family motto was 'ad astra per ardua' and fragments from another painted ceiling had gold stars from the family crest. A large, two-chambered, oblong, late 17th century dovecot sits about 140 metres (150 yd) to the southeast. The castle featured as a location in the 'Outlander' TV series.

How To Get To Midhope Castle (Map):