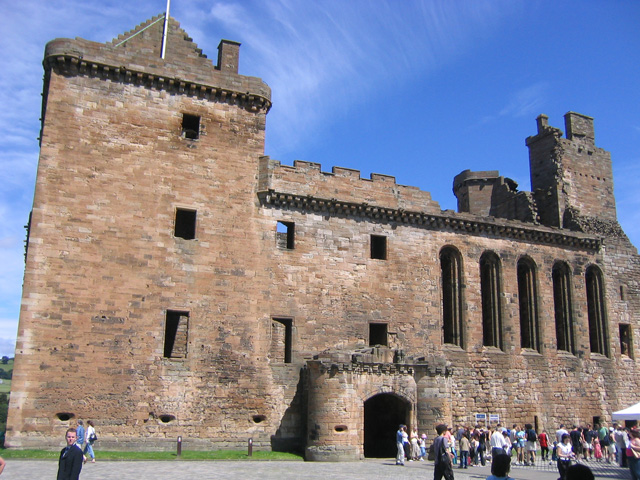 Location: Linlithgow, West Lothian, Scotland.
Built: 12th century.
Condition: Ruins.
Ownership / Access: Historic Scotland.
Opening Times: Check their website for more info.
Price of Admission: Check their website for more info.
Notes: The ruins of Linlithgow Palace are situated in the town of Linlithgow, West Lothian, Scotland, 15 miles (24 km) west of Edinburgh. The palace was one of the principal residences of the monarchs of Scotland in the 15th and 16th centuries. Although maintained after Scotland's monarchs left for England in 1603, the palace was little used, and was burned out in 1746. It is now a visitor attraction in the care of Historic Scotland.The palace has been actively conserved since the early 19th century and is today managed and maintained by Historic Scotland. The site is open to visitors all year round, usually subject to an entrance fee for non-members, but on occasion the entry fee is waived during the organisation's "Doors open days". In summer the adjacent 15th-century parish church of St Michael is open for visitors, allowing a combined visit to two of Scotland's finest surviving medieval buildings. Historic Scotland is running an experiment with junior tour guides. Using young people (primary 6-7) from the nearby school Linlithgow Primary, schools can arrange tours by these young people. During the summer young people from both the primary school and Linlithgow Academy can volunteer to conduct these tours. A Strathspey for bagpipes was composed in honour of Linlithgow Palace. The Palace is said to be haunted by the spectre of Mary of Guise, mother to Mary, Queen of Scots. On 2 December 2012, Chanel held its tenth Métiers d’Art show in the palace. The collection, designed by Karl Lagerfeld was called 'Paris-Edimbourg' and inspired by Scottish style using tartan fabrics. The show renewed media interest in the possibility of restoring the roof of the palace. In August 2014 a music festival was held on the palace's ground called 'Party at the Palace'. Another Party at The Palace will take place in August 2015.

How To Get To Linlithgow Palace (Map):