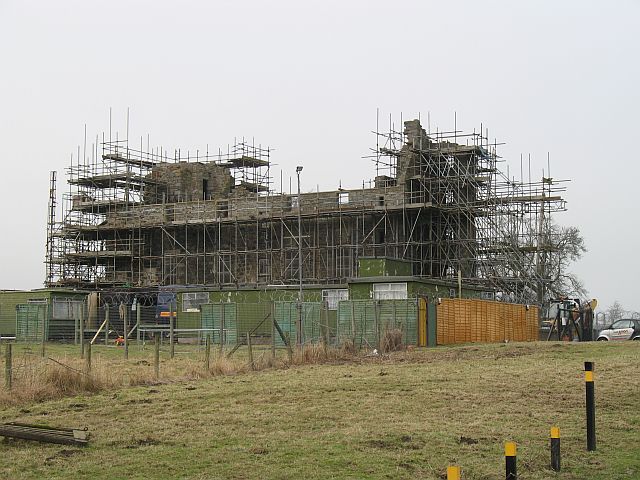 Location: Linlithgow, West Lothian, Scotland.
Built: 1590.
Condition: Ruined.
Ownership / Access: --
Notes: Duntarvie Castle is a ruined Scots Renaissance house in West Lothian, Scotland. It is located 1.5 kilometres (0.93 mi) north of Winchburgh and 9 kilometres (5.6 mi) east of Linlithgow, close to the M9 motorway. Constructed in the late 16th century, the building has been undergoing restoration since the 1990s. The roofless house is protected as a category A listed building, and a scheduled monument. The lands of Duntarvie were in possession of the Lindsays from 1527. A charter of 1605 transferred the property from the Lindsays to the Hamiltons of Abercorn, and this 1605 charter infers the existence of the castle as early as 1212. The Durham family held Duntarvie as tenants of the Hamiltons, although according to Historic Scotland, Duntarvie was granted to James Durham in 1588, who had the building constructed shortly afterward. Alexander Durham (died 1584) held royal appointments including as a clerk in the Exchequer, and Master of the Prince's Wardrobe to King James VI. Alexander's son James took over his father's offices in 1580, and served as Chamberlain for Linlithgowshire between 1595 and 1600. James witnessed several royal charters made by King James at Holyroodhouse. The Durham family left Duntarvie in the 1770s. By 1826 the house was in the ownership of the Earl of Hopetoun, and in need of urgent repair. It was uninhabited from the 1840s, and by the 20th century it was ruinous and roofless. In the late 20th century the shell was purchased by kiltmaker Geoffrey Nicholsby, with the intention of restoring it as a headquarters of his business Highland Crafts Ltd. Preparatory work began in 1994, but part of the east tower collapsed in January 1995.[citation needed] In April 2013 Nicholsby obtained permission to develop a track on the grounds, to be used by one person mini tanks. Work is expected to be completed by summer 2014.