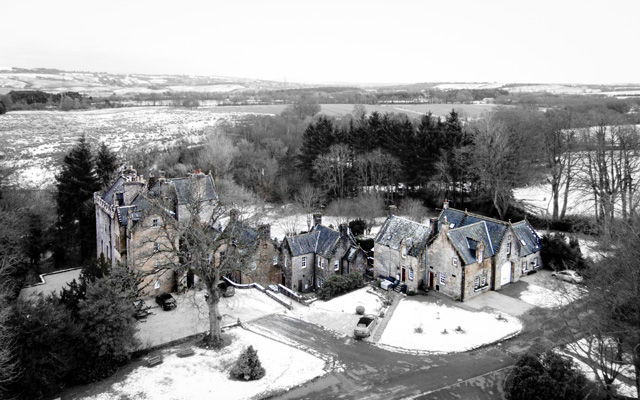 Location: Bathgate in West Lothian, Scotland.
Built: 16th century.
Condition: Intact.
Ownership / Access: In use as a hotel.
Notes: Bridge Castle is an L-plan castle, dating from the 16th century, standing on a rocky site 3 miles (4.8 km) north west of Bathgate in West Lothian, Scotland, on the west of the Barbauchlaw Burn. The former name of the castle was Little Brighouse.[1] The castle was sold by Alexander Stewart to William Livingstone, 6th Lord Livingston in 1588. Lord Livingston probably added the castle wing. After the Livingstones supported the Jacobite rising of 1715 they forfeited their land and titles. The Hopes acquired the property which remains in their possession. The architect James Maitland Wardrop altered the property internally and enlarged it to form a Victorian mansion. The building is now a hotel.