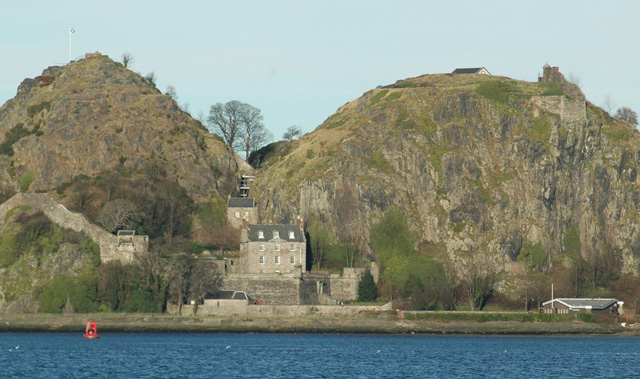 Location: Dumbarton, Scotland.
Built: 17th-18th century.
Condition: Ruined.
Ownership / Access: Historic Scotland.
Opening Times: Check their website for more info.
Price of Admission: Check their website for more info.
Notes: Dumbarton Castle has the longest recorded history of any stronghold in Scotland. It overlooks the Scottish town of Dumbarton, and sits on a plug of volcanic basalt known as Dumbarton Rock which is 240 feet (73 m) high. Today all visible traces of the Dark-Age Alt Clut, its buildings and defences, have gone. Not much survives from the medieval castle: the 14th-century Portcullis Arch, the foundations of the Wallace Tower, and what may be the foundations of the White Tower. There is a 16th-century guard house, which includes a face which according to legend is "Fause Menteith", who betrayed William Wallace. Most of the existing structures were built in the 18th century, including the Governor's House, built for John Kennedy, 8th Earl of Cassilis, and fortifications which demonstrated the struggle by military engineers to adapt an intractable site to contemporary defensive needs. The splendid views from the twin summits of the White Tower Crag and the Beak remind us why this rocky outcrop was chosen as 'the fortress of the Britons' centuries ago. The castle is open on a daily basis during the summer season and Saturday-Wednesday in the winter. Visitors must climb the 557 steps to see the White Tower Crag and other features. Dumbarton Rock is in state ownership and is legally protected by the Scottish Government as a Scheduled Ancient Monument, to conserve it for future generations. Activities such as rock climbing are forbidden; any change or damage caused is considered a criminal offence.

How To Get To Dumbarton Castle (Map):