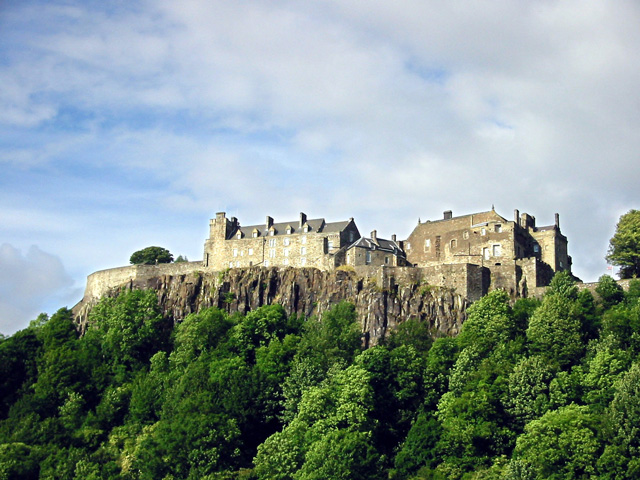 Location: Stirling, Scotland.
Built: Castle dates from at least early 12th century, present buildings mostly built between 1490 and 1600.
Condition: Still in use today.
Ownership / Access: Historic Scotland.
Opening Times: Check their website for more info.
Price of Admission: Check their website for more info.
Notes: Stirling Castle, located in Stirling, is one of the largest and most important castles, both historically and architecturally, in Scotland. The castle sits atop Castle Hill, an intrusive crag, which forms part of the Stirling Sill geological formation. It is surrounded on three sides by steep cliffs, giving it a strong defensive position. Its strategic location, guarding what was, until the 1890s, the farthest downstream crossing of the River Forth, has made it an important fortification from the earliest times. Most of the principal buildings of the castle date from the fifteenth and sixteenth centuries. A few structures of the fourteenth century remain, while the outer defences fronting the town date from the early eighteenth century. Several Scottish Kings and Queens have been crowned at Stirling, including Mary, Queen of Scots, in 1542. There have been at least eight sieges of Stirling Castle, including several during the Wars of Scottish Independence, with the last being in 1746, when Bonnie Prince Charlie unsuccessfully tried to take the castle. Stirling Castle is a Scheduled Ancient Monument, and is now a tourist attraction managed by Historic Scotland.The castle esplanade, or parade ground, has been used as an open-air concert venue for several noted acts, some of whom have used Stirling Castle and the surrounding scenery to film "in concert" DVDs. These acts include R.E.M., Ocean Colour Scene, Bob Dylan, Wet Wet Wet, and Runrig. The esplanade also hosts the city's Hogmanay celebrations. The Regimental Museum and Home Headquarters of the Argyll and Sutherland Highlanders are located in the King's Old Building. The castle is open to the public year round.Stirling Castle is a popular place for tourists, and according to figures released by the Association of Leading Visitor Attractions, nearly 380,000 people visited in 2010. An illustration of Stirling Castle features on the reverse side of a current series of 20 notes issued by the Clydesdale Bank, with Robert the Bruce on horseback in the foreground. Due to its similar appearance to Colditz Castle in Saxony, Germany, the castle was used to film the exterior shots for the 1970s TV series Colditz, a drama about the many attempts of Allied POWs to escape from the castle during its use as a military prison in the Second World War.

How To Get To Stirling Castle (Map):