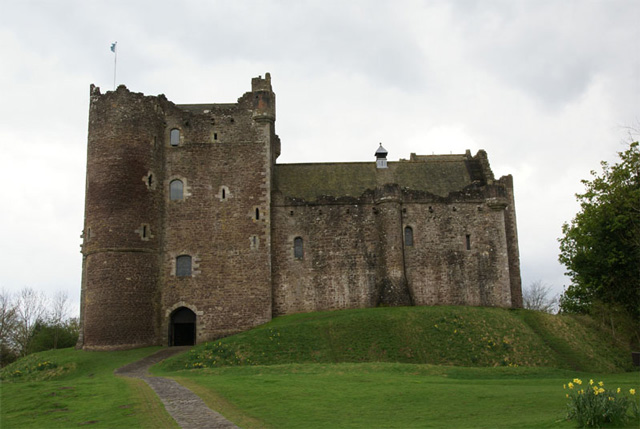 Location: Doune, Stirling, Scotland.
Built: c.1400.
Condition: Ruined.
Ownership / Access: Historic Scotland.
Opening Times: Check their website for more info.
Price of Admission: Check their website for more info.
Notes: Doune Castle is a medieval stronghold near the village of Doune, in the Stirling district of central Scotland. The castle is sited on a wooded bend where the Ardoch Burn flows into the River Teith. It lies 8 miles (13 km) north-west of Stirling, where the Teith flows into the River Forth. Upstream, 8 miles (13 km) further north-west, the town of Callander lies at the edge of the Trossachs, on the fringe of the Scottish Highlands. Recent research has shown that Doune Castle was originally built in the thirteenth century, then probably damaged in the Scottish Wars of Independence, before being rebuilt in its present form in the late 14th century by Robert Stewart, Duke of Albany (c.1340-1420), the son of King Robert II of Scotland, and Regent of Scotland from 1388 until his death. Duke Robert's stronghold has survived relatively unchanged and complete, and the whole castle was traditionally thought of as the result of a single period of construction at this time. The castle passed to the crown in 1425, when Albany's son was executed, and was used as a royal hunting lodge and dower house. In the later 16th century, Doune became the property of the Earls of Moray. The castle saw military action during the Wars of the Three Kingdoms and Glencairn's rising in the mid-17th century, and during the Jacobite Risings of the late 17th century and 18th century. By 1800 the castle was ruined, but restoration works were carried out in the 1880s, prior to its passing into state care in the 20th century. It is now maintained by Historic Scotland. Due to the status of its builder, Doune reflected current ideas of what a royal castle building should be. It was planned as a courtyard with ranges of buildings on each side, although only the northern and north-western buildings were completed. These comprise a large tower house over the entrance, containing the rooms of the Lord and his family, and a separate tower containing the kitchen and guest rooms. The two are linked by the great hall. The stonework is almost all from the late 14th century, with only minor repairs carried out in the 1580s. The restoration of the 1880s replaced the timber roofs and internal floors, as well as interior fittings.

How To Get To Doune Castle (Map):