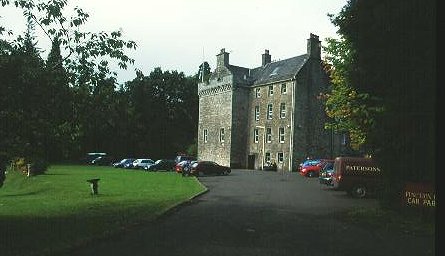 Location: Fintry, Stirling, Scotland.
Built: 1296.
Condition: Occupied.
Ownership / Access: Private.
Opening Times: Check their website for more info.
Price of Admission: Check their website for more info.
Notes: Culcreuch Castle is a Scottish castle close to the village of Fintry, near Loch Lomond. It had been the home of the Barons of Culcreuch since 1699, and was turned into a hotel, venue and visitor attraction in the 1980s. Culcreuch Castle was built in 1296 by Maurice Galbraith. It was the clan seat of Clan Galbraith from 1320 to 1624, when it was sold to a cousin, Alexander Seton of Gargunnock, to settle a financial debt. In 1632, it was purchased by Robert Napier, a younger son of John Napier, the 8th Laird of Merchiston. The Napier family held the estate for five generations. The castle was used to garrison Oliver Cromwell's troops in 1654. In 1796, the castle was sold to Alexander Spiers of Glasgow, who built a cotton mill and a distillery in Fintry. It was sold in 1890 to J. C. Dunwaters, then again in 1901 to Walter Menzies. It passed into the hands of Hercules Robinson in the 1970s, the last of that line of the Menzies family. It was sold in 1984 to Arthur Haslam, who operated the castle as a hotel. In 2007, ownership was transferred to a holding company in Los Angeles, and the property is now managed by Robert Reynolds.

How To Get To Culcreuch Castle (Map):