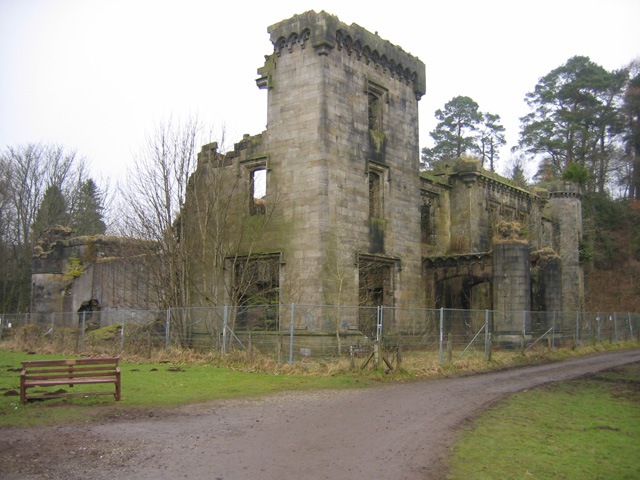 Location: Milngavie, East Dunbartonshire, Scotland.
Built: 1854.
Condition: Ruin.
Ownership / Access: Private.
Notes: Craigend Castle is a ruined country house, located to the north of Milngavie, in East Dunbartonshire, central Scotland. The lands of Craigend were part of the Barony of Mugdock in medieval times, but the estate was sold in the mid-17th century to the Smith family. John Smith (1724-1812) was born at Craigend and became a merchant and the founder, in 1751, of booksellers John Smith & Son. John Smith built a plain house on the estate, but after his death, in 1816, his son, James Smith, incorporated that house in a much more ornate mansion. It was designed by Alexander Ramsay, in what is described as Regency Gothic style. Craigend was sold to Sir Andrew Buchanan, the former Ambassador to the Habsburg court in Vienna, in 1851. James Outram, one-time owner of the Glasgow Herald newspaper, later leased the Castle from the Buchanan family in the early years of the 20th Century. In between these years Glasgow magistrate and fine art collector Archibald McLellan leased the castle. After acquiring Craigend Castle in 1835 he resided there until his death in 1854. In 1920 Craigend Castle was tenanted by Sir Harold E. Yarrow, Chairman & Managing Director of Yarrow Shipbuilders, who moved there from 'Fairlawn', Ralston Road, Bearsden. Glasgow businessman Andrew Wilson and his zoologist son, William, bought part of Craigend Estate from the Buchanan family and opened a zoo at Craigend Castle stables in 1949, with various exotic animals, but it failed to attract significant visitors and eventually closed in 1954. The stables and zoo grounds became part of Mugdock Country Park but the main house has become a ruin. The stable block, located to the north of the house, now serves as the country park visitor centre. Craigend Estate, adjacent, is privately owned and is operated as a cattle and sheep farm.

How To Get To Craigend Castle (Map):