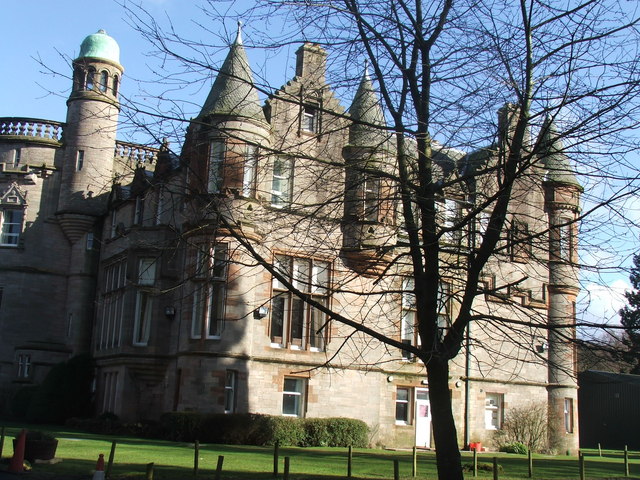 Location: Stirling, Scotland.
Built: 1868.
Condition: Occupied.
Ownership / Access: Church of Scotland.
Opening Times: Check their website for more info.
Price of Admission: Check their website for more info.
Notes: Ballikinrain Castle was built in 1868 for Sir Archibald Orr-Ewing, (1818-1893) a Conservative Party politician. Orr-Ewing was Member of Parliament (MP) for Dunbartonshire from 1868 to 1892, and was created a baronet on 8 March 1886. He commissioned David Bryce (1803-1876) to design a new house in the Scottish Baronial style, for his 4,500-acre (1,800 ha) estate. The location is alongside the Ballinkinrain Burn, which rises to the south, on the Earl's Seat (578 metres (1,896 ft)), and runs for about 4 kilometres (2.5 mi) across Ballikinrain Muir and through the estate, making in its descent a number of cascades, to the Endrick Water. The castle was burned-out in June 1913, the blaze being attributed to suffragettes, causing 100,000 of damage. It was rebuilt in 1916. In the early 20th century Ballikinrain Castle hosted Glasgow Poor Children's Fresh-Air Fortnight accommodating about 60 poor children. For a short time it was a hotel. Later, on the outbreak of the Second World War in 1939, St. Hilda's School for Girls, a boarding school based at Liberton near Edinburgh, took up temporary residence at Ballikinrain Castle. After the war St Hilda's remained at Ballinkinrain, owing to the difficulty of securing a satisfactory renovation of the buildings at Liberton, which had been used by the army. The building is protected as a category B listed building.[6] Between 1950-1965 there was a tourist caravan and camping site, complete with site shop and outside swimming pool, within the grounds. The pool was fed by Campsie spring water.

How To Get To Ballikinrain Castle (Map):