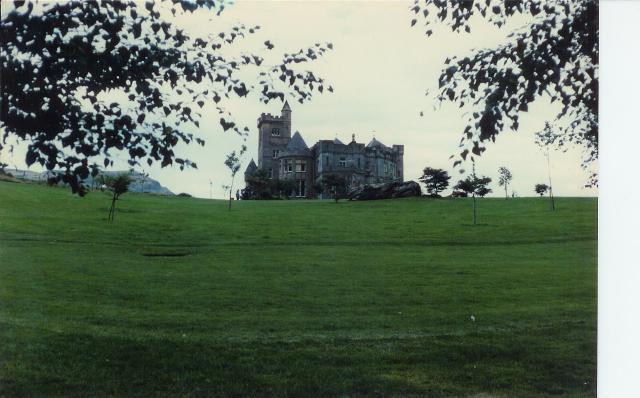 Location: Stirling, Scotland.
Built: 1790s.
Condition: Occupied.
Ownership / Access: Stirling University.
Opening Times: Check their website for more info.
Price of Admission: Check their website for more info.
Notes: Airthrey Castle is a historic building and estate which now forms part of the buildings and grounds of the University of Stirling in central Scotland. There are two suggested origins of the name "Airthrey" - a corruption of Ard-rhedadie (a high or ascending road, referring to the old road which leads through it to Sheriffmuir), or from the Gaelic "Aithrin" - "a sharp point" or "conflict". This could refer to a battle fought near the site of the Castle in 839, when the Picts were defeated by the Scots under Kenneth McAlpine. The name appears in a charter of King David I, thought to be from before 1146. In 1370, the estate was granted to Sir John Herice, Keeper of the nearby Stirling Castle. Then the land passed to William Graham, 3rd Lord Graham, for gallantry he displayed in the Battle of Sauchieburn in 1488 (in which King James III was killed attempting to subdue a group of rebel barons.). He was made Earl of Montrose in 1504 but died at the Battle of Flodden in 1513. The estate remained in the ownership of the Clan Graham down to James Graham, 1st Marquess of Montrose, who fought a campaign in support of King Charles I from 1644 to 1650. By this time, the Airthrey Estate was in the ownership of a minor branch of the Grahams. In 1678, the estate was purchased by John Hope of Hopetoun who was succeeded by Charles Hope, 1st Earl of Hopetoun who was elevated to the House of Lords in 1703 with the titles of Viscount Airthire, Baron Hope and Earl of Hopetoun. In 1759, the estate was sold to Captain Robert Haldane of Plean. The 363-acre (1.47 km2) grounds and man-made loch were designed by Thomas White for the Haldane family in the late 18th century. In 1791, Captain Haldane's great-nephew, Robert Haldane, commissioned the design by the eminent architect Robert Adam, which is the basis of Airthrey Castle today. Despite the development, he sold it to Sir Robert Abercrombie in 1798. The castle and estate remained in the ownership of the Abercrombie family until 1889 when Donald Graham bought it and made a large addition to the castle in 1889-91. During the Second World War it became a maternity hospital and was used as such until 1969, supplementing the needs of Stirling Royal Infirmary. Then in the 1960s, as a result of the Robbins Report, the estate was selected as the site of the first completely new Scottish University since the University of Edinburgh was established in 1582. The University of Stirling opened in 1967. Its campus is located in 60 acres (240,000 m2) of woodland, 300 acres (1.2 km2) of mature landscaped parkland, a loch with an abundance of wildlife - and incorporates Airthrey Castle, where the School of Law is based as well as the University's student radio station, Air3. Airthrey Castle retains many original features, as well as housing the University's Moot Courtroom. From September 2014 - the castle will also become home to the University's new international study centre operated in partnership with INTO University Partnerships.

How To Get To Airthrey Castle (Map):