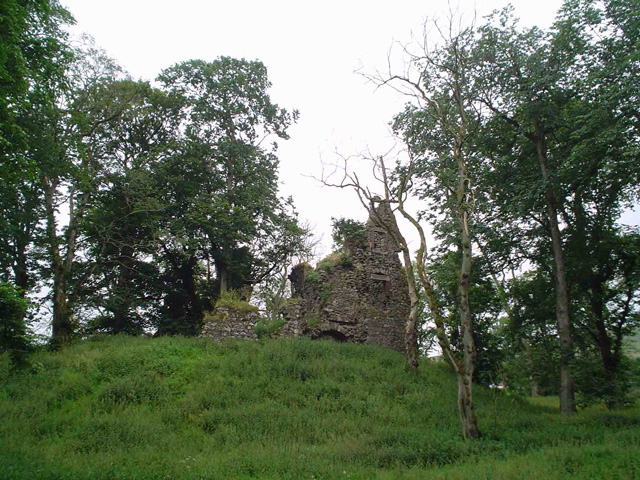 Location: Crawford, South Lanarkshire, Scotland.
Built: 1175.
Condition: Ruin.
Ownership / Access: --
Opening Times: Check their website for more info.
Price of Admission: Check their website for more info.
Notes: Crawford Castle, substantially in ruins, is located on the north bank of the River Clyde, around half a mile north of Crawford, South Lanarkshire, Scotland. The ruins stand on an earlier motte and bailey earthwork. The castle was formerly known as Lindsay Tower, after its former owners, the Lindsay family. The strategic location of the castle, at NS954213, guards the approach from England into the upper Clyde Valley. The early earthworks of Crawford Castle comprise a motte around 5m high, with a surrounding ditch and a bailey some 45m by 33m to the south-west. On the motte are the remains of a curtain wall, surrounding an enclosure around 20m square. There may have been round towers at the corners of this enclosure, which probably dates to the 16th or early 17th centuries. A range of buildings on the south-west side of the castle were built at around the same time. This tower-like range was of three storeys, plus an attic, with a vaulted basement and projecting chimney-breast. To the south-east, a second range was added later in the 17th century, providing more spacious accommodation with larger windows. The prominent arched recess in the east wall suggests that a single storey building of some kind projected from the main structure at this location. Much of the present remains probably date from the 17th century rebuilding by the Marquess of Douglas. Crawford Castle is specified in a list of monuments published by the Minister of Public Building and Works under the Ancient Monuments Consolidation and Amendment Act 1913. It is now a Scheduled Ancient Monument and is a Category B Listed Building. The Royal Commission on the Ancient and Historical Monuments of Scotland lists the site as a castle or motte.