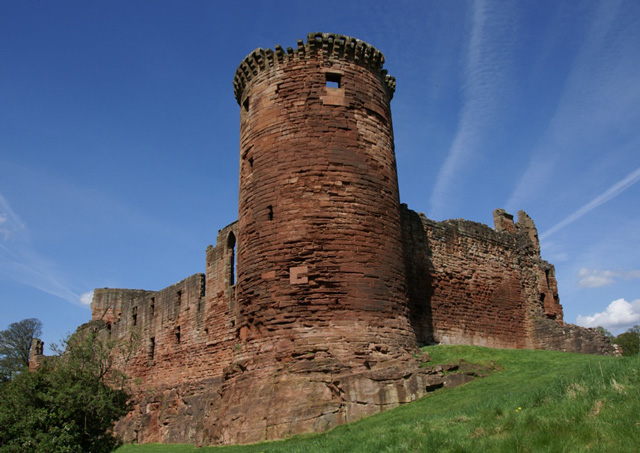 Location: Bothwell, South Lanarkshire, Scotland.
Built: 13th century.
Condition: Ruin.
Ownership / Access: Historic Scotland.
Notes: Bothwell Castle is a large medieval castle sited on a high, steep bank, above a bend in the River Clyde, in South Lanarkshire, Scotland. It is located between Bothwell and Uddingston, about 10 miles (16 km) south-east of Glasgow. Construction of the castle was begun in the 13th century by the ancestors of Clan Murray, to guard a strategic crossing point of the Clyde. Bothwell played a key role in Scotland's Wars of Independence, changing hands several times. The huge cylindrical donjon was built in the 13th century, but before the rest of the castle was completed it was severely damaged in a series of sieges. Rebuilding in the early 15th century enlarged the castle, but it was abandoned by the 18th century. The present ruin is rectangular, with the remains of the donjon to the west, and the later Great Hall to the east. The courtyard is enclosed by long curtain walls, with round towers at the south-east and south-west corners. The castle was described by Scottish archaeologist William Douglas Simpson as one of the "foremost secular structures of the Middle Ages in Scotland".

How To Get To Bothwell Castle (Map):