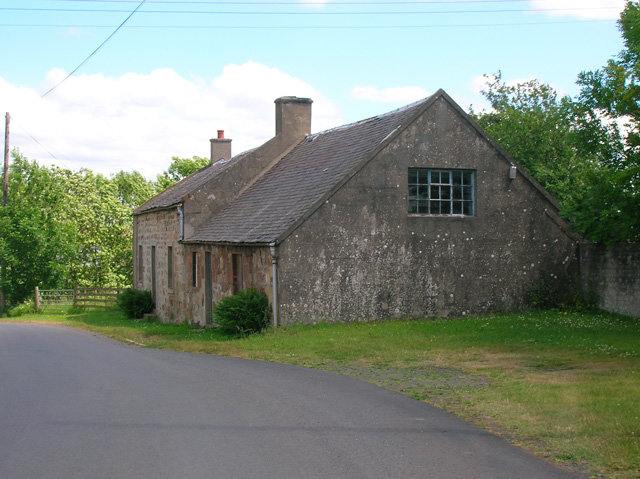 Location: Tarbolton, South Ayrshire, Scotland.
Built: 16th century.
Condition: Sparse remains.
Ownership / Access: Private.
Notes: Circa 1617 William Wallace, grandson of Sir Hugh Wallace of Craigie, expected to inherit the property from his father, also William Wallace, known as Minister of Fail, the commendator. He listed the monastery lands as the manor place of Failford and the gardens known as the West Yaird, Neltoun Yaird, Gardine Yaird, Yeister Yaird, and Kirk Yaird. In August 1618 Walter Whyteford was granted the Monastery of Fail in place of William Wallace; this grant was ratified by Parliament in 1621. The Whitefords also had properties at Blaiquharn (previously Whiteford) and Dunduff Castle near Dunure. Blaeu's map of 1654 shows a fairly extensive wooded area around Feil Abbey (sic) with a pale around three sides and the final boundary as the Water of Fail. The immunities derived from the monastery passed into the hands of the Earls of Dundonald and in 1690, William, Earl of Dundonald, was served heir to his father, John Earl of Dundonald, in the beneficies of Failford, spiritually as well as temporalily. The buildings were repaired after passing into the ownership of the Wallace family, and for a time became known as Fail Castle; the former monastery was allowed to fall derelict again after the time of the Laird of Whytford. In the 1860s the lands of Fail were held by Edward H. Blair of Dunskey and Brounehill, second son of Sir D. Hunter Blair of Blairquhan.The ruins consisted at this time of a gable and part of a side-wall of the 'castle'. The surviving ruins are near the Fail Castle cottage across from Fail Mains, and these comprise a fragment of wall (22m long and up to 1.3m high) revetting the break of the slope at the foot of the garden, 25m south of the cottage; below ground level a second wall is detectable, running towards the north for over 23m at a right angle to the other wall. Building alterations have uncovered 'incised slabs' and structural foundations.