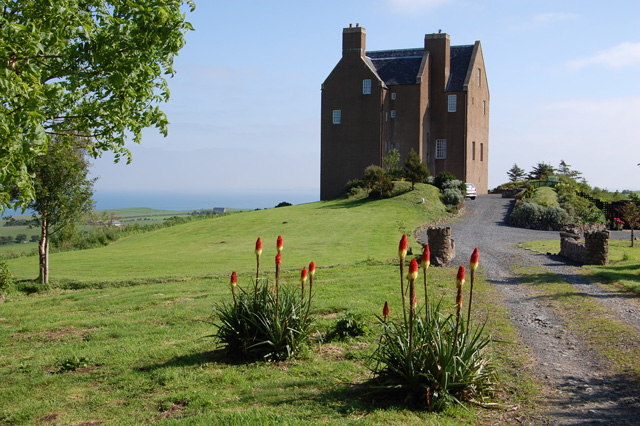 Location: Dunduff, South Ayrshire, Scotland.
Built: Circa 1696.
Condition: Restored.
Ownership / Access: Private.
Notes: Dunduff Castle is a restored stair-tower in South Ayrshire, Scotland, built on the hillside of Brown Carrick Hills above the Drumbane Burn, and overlooking the sea above the village of Dunure. Lying to the east of Dunduff Farm on a rocky knoll, this tower castle was built to an L-shaped plan, with a square three floored stair-tower in the re-entrant angle on the south. Three barrel-vaulted chambers are on the ground floor and these were accessed via the lobby of the tower. A private chamber on the first floor was accessed by a corridor that ran the length of the main block. A fireplace in the wing heated the hall, with its splayed window embrasure. An intermediate floor once existed, as indicated by joist sockets. Window and door features of the original ruin suggest construction in the late 16th and early 17th centuries. The General Roy map of 1747-55 shows a Dunduff Mill associated with the castle; this mill is also recorded in a charter of 1581. William Aiton's map of 1808 shows Dunduff Castle, however it is not annotated as a ruin, although Dunure is. Groome refers to the ruin in 1903 as a baronial fortalice.[10]The ruins were consolidated and the tower completely restored for use as a family residence in the 1990s. Ian Begg produced the design for the restoration.

How To Get To Dunduff Castle (Map):