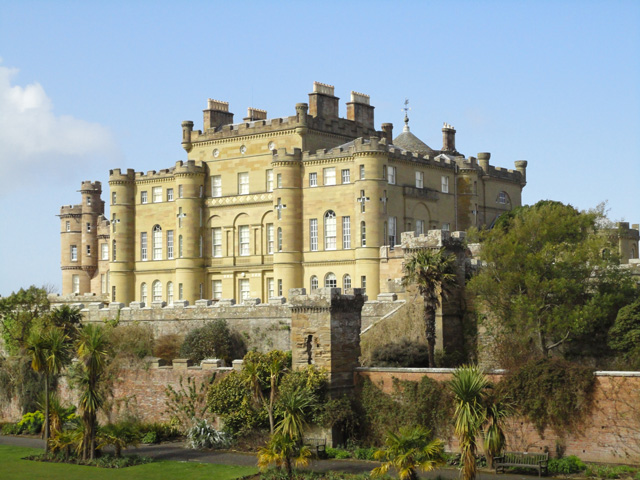 Location: Carrick, South Ayrshire, Scotland.
Built: 1792.
Condition: Preserved.
Ownership / Access: National Trust for Scotland.
Opening times: Check their website for more info.
Price of admission: Check their website for more info.
Notes: Culzean Castle is a castle near Maybole, Carrick, on the Ayrshire coast of Scotland. It is the former home of the Marquess of Ailsa, the chief of Clan Kennedy, but is now owned by the National Trust for Scotland. The clifftop castle lies within the Culzean Castle Country Park and is opened to the public. Since 1987, an illustration of the castle has featured on the reverse side of five pound notes issued by the Royal Bank of Scotland. Culzean Castle was constructed as an L-plan castle by order of the 10th Earl of Cassilis. He instructed the architect Robert Adam to rebuild a previous, but more basic, structure into a fine country house to be the seat of his earldom. The castle was built in stages between 1777 and 1792. It incorporates a large drum tower with a circular saloon inside (which overlooks the sea), a grand oval staircase and a suite of well-appointed apartments. In 1945, the Kennedy family gave the castle and its grounds to the National Trust for Scotland (thus avoiding inheritance tax). In doing so, they stipulated that the apartment at the top of the castle be given to General of the Army Dwight D. Eisenhower in recognition of his role as Supreme Commander of the Allied Forces in Europe during the Second World War. The General first visited Culzean Castle in 1946 and stayed there four times, including once while President of the United States. An Eisenhower exhibition occupies one of the rooms, with mementoes of his lifetime.The Ayrshire (Earl of Carrick's Own) Yeomanry, a British Yeomanry cavalry regiment, was formed by The Earl of Cassillis at Culzean Castle in about 1794. On 24 June 1961, the regiment returned to the castle to be presented with its first guidon by General Sir Horatius Murray, KBE, CB, DSO. The castle re-opened in April 2011 after a refurbishment funded by a gift in the will of American millionaire William Lindsay to the National Trust for Scotland. Lindsay, who had never visited Scotland, requested that a significant portion of his $4 million go towards Culzean. Lindsay was reportedly interested in Eisenhower's holidays at the castle.[6] Culzean Castle received 220,000 visitors in 2013, making it the National Trust for Scotland's second-most popular property.

How To Get To Culzean Castle (Map):