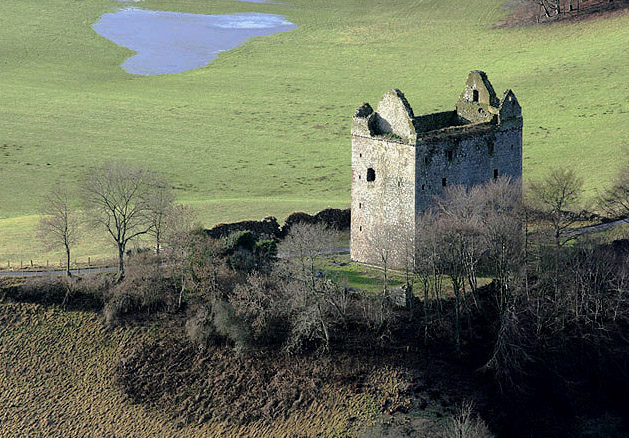 Location: Selkirk, Scottish Borders, Scotland.
Built: 14th century.
Condition: Ruin.
Ownership / Access: Private.
Notes: Newark Castle is a large, ruined tower house standing in the grounds of Bowhill House, in the valley of the Yarrow Water three miles west of Selkirk in the Scottish Borders. In addition to the keep, sections of a gatehouse and wall survive. Newark Castle was granted to Archibald Douglas, Earl of Wigtown around 1423. It was incomplete at this time and work continued until about 1475. The surrounding barmkin was added around 1550, and the present battlements and two square caphouses date from about 1600. After the fall of the Black Douglases the castle was held by the crown, and in 1473 it was given to Margaret of Denmark, wife of James III. The royal arms are visible on the west gable. Newark was unsuccessfully besieged by an English army in 1547, but was burnt the following year. In 1645, during the Wars of the Three Kingdoms, 100 royalist followers of the Marquis of Montrose were shot in the barmkin of Newark after the Battle of Philiphaugh. The castle was altered for Anne Scott, 1st Duchess of Buccleuch at the end of the 17th century. It was visited by Sir Walter Scott and William and Dorothy Wordsworth in 1831. The castle is believed to be haunted by the souls of women and children murdered by brutal soldiers at the site, who are heard each year on September 13th.