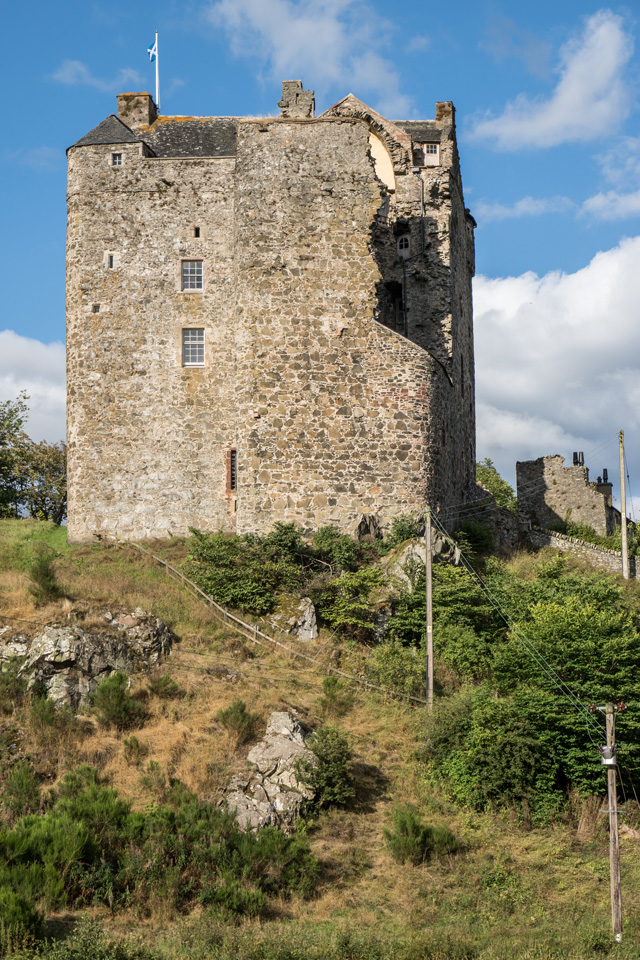 Location: Peebles, Scottish Borders, Scotland.
Built: c.1263-1266.
Condition: Ruined.
Ownership / Access: Earl of Wemyss and March.
Notes: Neidpath Castle is an L-plan rubble-built tower house, overlooking the River Tweed about 1 mile (1.6 km) west of Peebles in the Borders of Scotland. The castle is closed to the public. Neidpath Castle is a tall L-plan tower house, one leg of the L being very short. It has rounded corners. The battlements are roofed and the sentry walk is a balustraded balcony. There are few windows, and two still have their iron bar protection. Inside, the basement and the first-floor hall are vaulted, and the hall is further divided by a wooden floor into two storeys. Other features include a pit dungeon, and some small exhibitions of artifacts found in the locale. There are remains of a partly walled garden. The archway is decorated with both the goats head emblem of the Hays and the strawberries of the Frasers.Neidpath has been used as a location for many films and television series, including Merlin: The Quest Begins starring Jason Connery and directed by David Winning, which was filmed in September and October 1997.

How To Get To Neidpath Castle (Map):