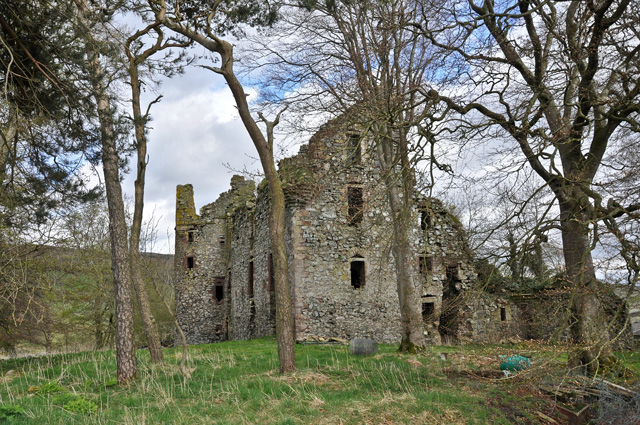 Location: Peebles, Scottish Borders, Scotland.
Built: 1578.
Condition: Ruin.
Ownership / Access: Duke of Buccleuch.
Notes: Drochil Castle is a ruined castle in the Scottish Borders. It is located above the Lyne Water, 10 kilometres (6.2 mi) north-west of Peebles, and 8 kilometres (5.0 mi) south of West Linton. James Douglas, 4th Earl of Morton, Regent of Scotland, started building Drochil Castle in 1578, three years before his execution by King James VI. It was no more than half built on his death, and was never finished.[1] The castle, consisting of four storeys and a garret, was as much a palace as a castle, as Morton intended to retire here from worldly business. The castle is of exceptional interest because of its design as a "double-tenement" with a wide central corridor running through the building from end to end on every storey. This opens up suites of apartments off it on either side. The castle has a round tower, 25 feet (7.6 m) in diameter, attached to each of two diagonally opposite corners. Each tower has two gunloops, preventing enemies from approaching the walls. On the first floor, the great hall measured 50 by 22 feet (15.2 by 6.7 m). In 1686, the castle was purchased by William Douglas, 1st Duke of Queensberry, and the ruins are still owned by his descendant the Duke of Buccleuch. The outer walls consist of whinstone rubble, quarried at Broomlee Hill, dressed with red sandstone. In the early 19th century, stone was taken to build the adjacent farm. The ruin is protected as a Category A listed building, and as a scheduled ancient monument.

How To Get To Drochil Castle (Map):