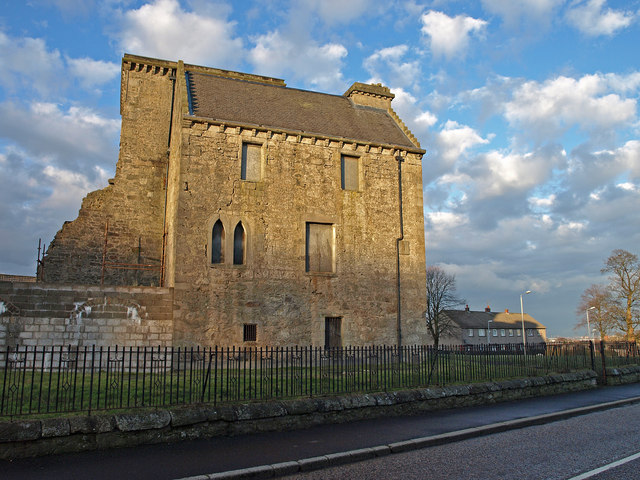 Location: Johnstone, Renfrewshire, Scotland.
Built: 18th century.
Condition: Undergoing restoration.
Ownership / Access: Private.
Notes: Johnstone Castle is a structure and former mansion in the town of Johnstone in Renfrewshire, Scotland. It belonged to the Houstouns of Milliken, who acquired the estate of Easter Cochrane in 1773. The original structure was substantially enlarged in 1771 and 1812 by George Houstoun, who had the structure remodelled in a castellated style complete with a turret at the left hand of the front elevation, possibly by the architect James Gillespie Graham. The most notable features were barrel vaulted rooms in the ground floor. Externally in addition to the battlemented decoration there was a rope styled string course. Although the castle and policies were considered particularly picturesque, the continued growth of the town of Johnstone reduced its size and the estate had largely disappeared by the start of the 20th century. Much of the house was demolished in 1950, and most of the remainder of the grounds was purchased by the local authority for housing in 1956. Today all that remains is the central square tower along with a crow-stepped bartizaned section of an older date. The tower is protected as category B listed building.

How To Get To Johnstone Castle (Map):