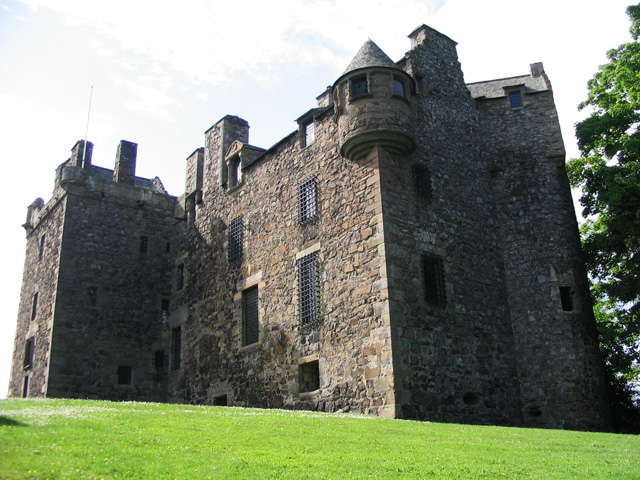 Location: River Tay, Perth, Scotland.
Built: 1560.
Condition: Intact.
Ownership / Access: Historic Scotland.
Opening times: Check their website for more info.
Price of admission: Check their website for more info.
Notes: Elcho Castle is located a short distance above the south bank of the River Tay approximately four miles south-east of Perth, Scotland. It consists of a Z-plan tower house, with fragments of a surrounding wall with corner towers. The Castle was built on the site of an older structure about 1560, and is one of the best surviving examples of its date in Scotland. A large portion of the Castle is accessible, although floors in some rooms have fallen, and much of the building can be walked through. The wall-walk is accessible at two points. The property is still owned by the family of the original builders, the Wemyss family (the style of the heir to the Earl of Wemyss is Lord Elcho), though it has not been inhabited for some 200 years. It has nevertheless been kept in good repair - one of the earliest examples in Scotland of a building being preserved purely for its historical interest. It is managed by Historic Scotland and is open to visitors throughout the summer. There is an entrance charge. An apple- and pear-tree orchard adjoining the Castle has been replanted in recent years, and a 16th-century 'beehive' doo'cot (Scots for dovecote) survives nearby.

How To Get To Elcho Castle (Map):