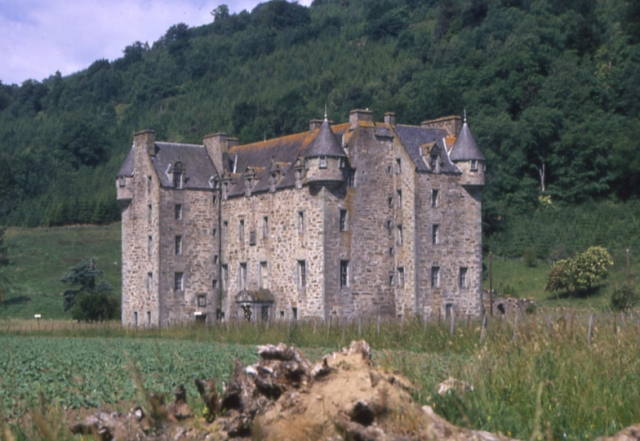 Location: Aberfeldy, Perthshire, Scotland.
Built: 16th century.
Condition: Intact.
Ownership / Access: Clan Menzies.
Notes: Castle Menzies in Scotland is the ancestral seat of the Clan Menzies. It is located a little to the west of the small village of Weem, near Aberfeldy in the Highlands of Perthshire, close to the former site of Weem Castle, destroyed c. 1502. The sixteenth century castle, built as a Z-plan castle, was the seat of the Chiefs of Clan Menzies for over 400 years. Strategically situated, it was involved in the turbulent history of the Highlands. Bonnie Prince Charlie, the Stuart Pretender to the throne, rested for two nights in the Castle on his way to the Battle of Culloden in 1746. The restoration of the ancient part of the castle involved the demolition of a greatly decayed 18th century wing. A large Victorian ballroom (not visible in the adjacent photograph) was, however, retained. The castle, restored by the Menzies Clan Society, is an example of architectural transition between an earlier tradition of rugged fortresses and a later one of lightly defensible 'chateaux'. The walls are of random rubble, originally harled (roughcast), but the quoins, turrets and door and window surrounds are of finely carved blue freestone. This attractive and extremely hard-weathering stone was also used for the architectural details and monuments at the nearby Old Kirk of Weem, which was built by the Menzies family and contains their monuments and funeral hatchments. A marriage stone above the original entrance was installed by James Menzies in 1571, to record his marriage to Barbara Stewart, daughter of the Earl of Atholl. Duleep Singh, last Maharajah of the Sikh Empire, lived at Castle Menzies between 1855 and 1858, following his exile from the Punjab in 1854. He was officially the ward of Sir John Spencer Login and Lady Login, who leased the castle for him.

How To Get To Castle Menzies (Map):