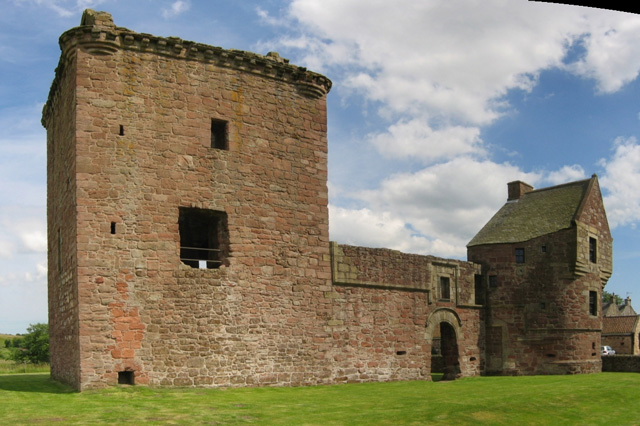 Location: Kinross, Perth and Kinross, Scotland.
Built: 15th or early 16th century.
Condition: Ruins.
Ownership / Access: Historic Scotland.
Notes: The remains of Burleigh Castle are located just outside the village of Milnathort, 1.5 miles north of Kinross, in Perth and Kinross, Scotland. The castle dates from the 15th and 16th centuries, and now sits beside the A911 road, opposite a 19th century steading, recently adapted into housing. The lands of Burleigh were held by the Balfours from 1446, when they were granted by James II to John Balfour of Balgarvie, and a tower house was erected in the late 15th or early 16th century. Sir James Balfour of Pittendreich extended the castle in the late 16th century, adding a curtain wall with a corner tower, and other outbuildings. In 1607 his son Sir Michael Balfour was raised to the peerage as Lord Balfour of Burleigh. Legend tells how Robert Balfour, before his accession as 5th Lord, narrowly escaped death when, in 1707, he was sentenced to beheading for the murder of the schoolmaster of Inverkeithing, who had the misfortune to have married Balfour's childhood sweetheart. Escaping from Edinburgh tolbooth, Balfour joined the Jacobite cause, proclaiming the 'Old Pretender' James Stuart king at Lochmaben, and fighting in the 1715 rising. Following the defeat of the Jacobites, Balfour was attainted, dying in France in 1757. The castle was forfeit to the Irwins, then passed to the Grahams of Kinross. It is now a Scheduled Ancient Monument in the care of Historic Scotland (no entrance charge; key available from nearby house at all reasonable times).

How To Get To Burleigh Castle (Map):