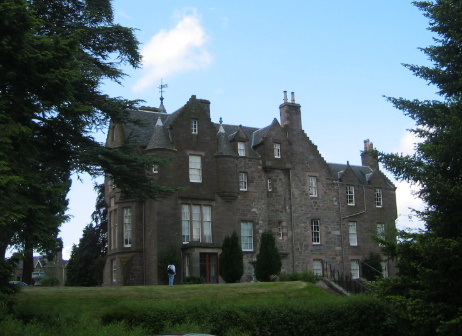 Location: Perth, Scotland.
Built: 1631
Condition: Intact.
Ownership / Access: The Regimental Trustees.
Opening times: Check their website for more info.
Price of admission: Check their website for more info.
Notes: Balhousie Castle, located in Perth, Scotland (on Hay Street, originally a few hundred metres north of the medieval town), dates to 1631, though its origins are believed to go back a further three hundred years. It originally served as the seat of the Earls of Kinnoull, and stood within a walled enclosure containing subsidiary buildings, orchards etc., on a terrace overlooking the North Inch. After falling into neglect in the early 19th century, the Castle was 'restored' (in fact, virtually rebuilt), and extensively remodelled on a larger scale in 1862-63 in the Baronial style by the architect David Smart. No original features survive except for parts of the original rubble walls on the east side. In 1962, the Castle became the Regimental Headquarters and Museum of The Black Watch. The latter displays the history of the regiment from 1739 to the present. The Black Watch Heritage Appeal was launched in September 2009 to raise in excess of 3.2 million to develop Balhousie Castle to provide a permanent home for the museum and archive of The Black Watch. The Regimental Trustees bought Balhousie Castle in January 2009.

How To Get To Balhousie Castle (Map):

Balhousie Castle On Wikipedia
Travels in Scotland: Castles and Towers