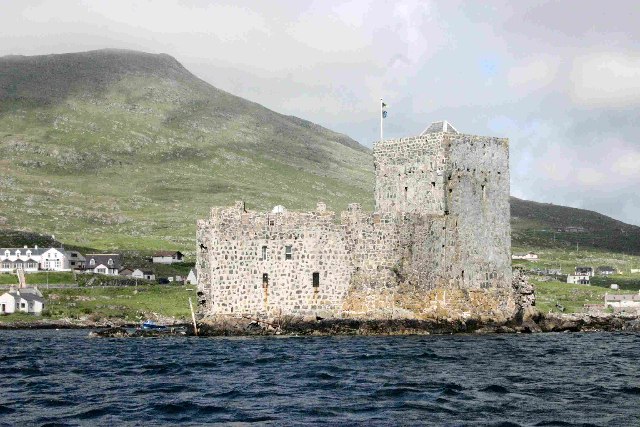 Location: Part of Barra, Western Isles, Castlebay, Scotland.
Built: mid 16th century.
Condition: Restored.
Ownership / Access: Private; leased to Historic Scotland.
Opening times: Check their website for more info.
Price of admission: Check their website for more info.
Notes: Kisimul Castle (Scottish Gaelic: Caisteal Chiosmuil) and also known as Kiessimul Castle, is a small medieval castle located on a small island off Castlebay, Barra, in the Outer Hebrides, Scotland. It gets its name from the Gaelic ciosamul meaning "castle island".The earliest documentary record of Kisimul Castle dates from the mid 16th century. Writing in 1549, Dean Munro stated of Barra that"Within the southwest end of this isle, ther enters a salt water loche, verey narrow in the entrey, and round and braide within. Into the middis of the saide loche there is ane ile, upon ane strenthey craige, callit Kiselnin, perteining to McKneil of Barray." However, Campbell (1936) points out that Monro has in part confused the nearby Bagh Beag with Bagh a' Chaisteil. Kisimul sits on a rocky islet in the bay just off the coast of Barra. As it is completely surrounded by the sea, it can only be reached by boat and is all but impregnable. Kisimul has its own fresh water wells. Legend has it that this has been the stronghold of the MacNeils since the 11th century. Kisimul was abandoned in 1838 when the island was sold, and the castle's condition deteriorated. Some of its stone was used as ballast for fishing vessels, and some even ended up as paving in Glasgow. The remains of the castle, along with most of the island of Barra, were purchased in 1937 by Robert Lister MacNeil, the then chief of Clan MacNeil, who made efforts at restoration. In 2001 the castle was leased by the chief of Clan MacNeil to Historic Scotland for 1000 years for the annual sum of 1 and a bottle of whisky. For the 2011 census the island was classified by the National Records of Scotland as an inhabited island that "had no usual residents at the time of either the 2001 or 2011 censuses.".

How To Get To Kisimul Castle (Map):