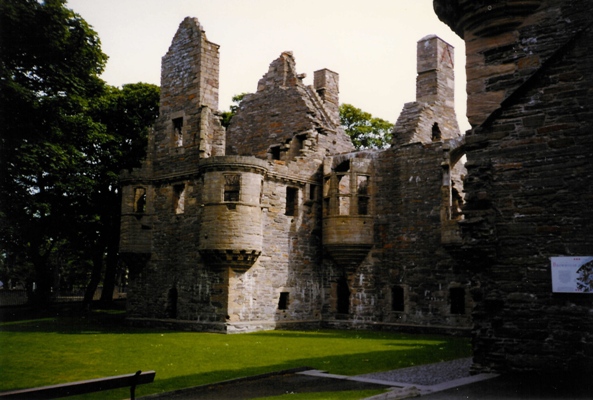 Location: Kirkwall, Orkney, Scotland.
Built: 17th century.
Condition: Ruin.
Ownership / Access: Historic Scotland.
Opening times: Check their website for more info.
Price of admission: Check their website for more info.
Notes: The ruins of the Earl's Palace lie near St Magnus's Cathedral in the centre of Kirkwall, Orkney. Built by Patrick, Earl of Orkney, construction began in 1607 and was largely undertaken via forced labour. Earl Patrick is widely acknowledged to have been one of the most tyrannical noblemen in Scotland's history. The palace was built after the Earl decided that the accommodation provided by the Bishop's Palace was inadequate for his needs. He decided to extend the complex by building a new palace on the adjoining land. This was complicated by the fact he did not actually own this property. He quickly acquired it by fabricating charges of theft against the unfortunate owner, trying him and having him executed. Upon his imprisonment at Edinburgh in 1609, his bastard son Robert began a rebellion on his behalf and seized the palace, along with nearby St Magnus's Cathedral and Kirkwall Castle. An army led by the Earl of Caithness laid siege, and the Castle was destroyed. Earl Patrick and his son were later executed for treason. After the Earl's death the palace continued to be the residence of the Bishops of Orkney sporadically until 1688, when it became the property of the Crown, and fell into ruin in the 18th century. It is currently in the possession of Historic Scotland. The ruins, though roofless, still have much of their original French-influenced Renaissance elegance. Turrets and decorations carved in the sandy coloured stonework, give glimpses of the former splendour of this residence..