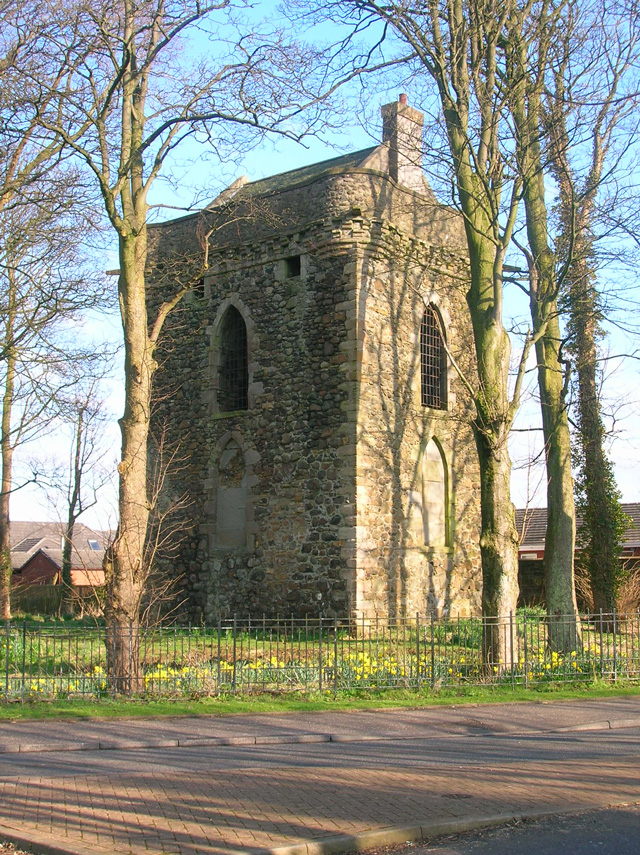 Location: North Ayrshire, Scotland.
Built: 1417.
Condition: Substantial ruin.
Ownership / Access: North Ayrshire Council.
Notes: The original castle was built circa 1417 by the Francis family, who also held land at Sprouston near Kelso. The barony passed by marriage to the Montgomerys of Greenfield. In the middle-ages, Stanecastle gave way to the ever expanding Eglinton Empire and William Francis of Stane passed his estate on to the Earls of Eglinton in the 15th century. Campbell states that the present castle was built in 1520 by Montgomerie of Greenfield, a cadet branch. In 1750 Alexander, 10th Earl of Eglinton, repaired the castle, converting it into a folly. The four open and four closed pointed windows were constructed for appearance only at this time and on the west side an armorial panel stone with the Earl of Eglinton's arms was put in place. Through some mistake this panel was said to have been placed upside down, however the shield is actually the right way up, the apparent fault is that the signet rings and fleur de lis are inside are upside down. Another error occurs on a similar sized armorial panel now preserved in the quadrangle of Eglinton Country Park in which the symbols are in the wrong quarters. An original feature is a spiral stair in the north-east corner. The Toll Road Act of 1774 gives details of The Road from the Cockpitt near Stone-Castle by Armsheugh, Showing that, not unusually, a Cock Pit existed here at one time. A Ley tunnel is said to run from Stanecastle to Eglinton Castle and Seagate in Irvine. Another tunnel is said to run from Stanecastle to Dundonald. A subterranean passage was found by workmen at Stanecastle in the 19th century. Knadgerhill was only acquired by the Earls of Eglinton in 1851 when they excambied part of the lands of Bogside Flats for them. This allowed the construction of the new entrance to the policies at Stanecastle via Long Drive. Visible today is the superb keep of the original estate, into whose wall is set an inscribed stone. This keep was altered with the addition of eight mock-Gothic arched windows in the 18th century, and has a modern roof with chimney and windows. Irvine Development Corporation stabilised and carried out repairs on the structure. The Montgomery Society of Scotland had attempted to purchase it as a clan headquarters and museum, but the plans came to nothing. Opposite the keep is the Stanecastle gate, a considerably younger structure but inkeeping with the overall design of the area. In the 20th century, this gateway, or rather its orientation, was altered. It once marked the southern entrance to the huge Eglinton Castle estate, now the Eglinton Country Park. The remaining section of the estate has been fenced off and protected. For many years, the modern gate was padlocked and this has given way to a more open policy. A record exists for the rare Rusty-Back Fern growing on the walls of the castle in the early 1900s. A search in 2002 did not locate the fern.

How To Get To Stanecastle (Map):