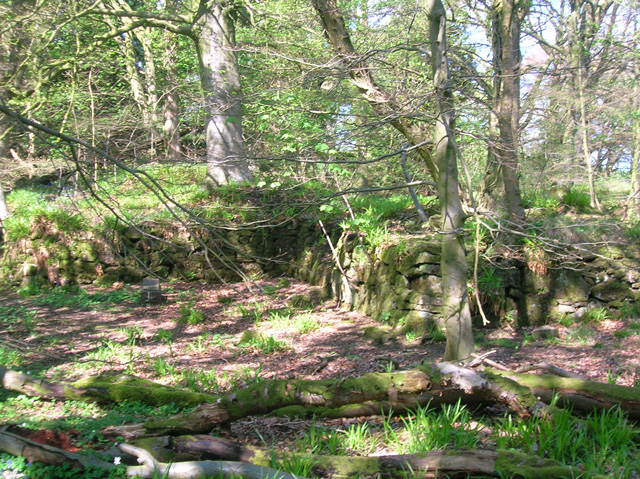 Location: Kilwinning, North Ayrshire, Scotland.
Built: --
Condition: Ruins.
Ownership / Access: Private.
Notes: The ruins of the old Montgreenan Castle or Bishop's Palace lie in a loop of the Lugton Water at the its confluence with the Cowlinn Burn. The name Dunach Brae for the strip of woodlands nearby, suggests that a hill fort or 'Dun' may have been in the vicinity at a much earlier date. Alexander Cunninghame, the Commendator of Kilwinning Abbey, was shot at his gate at Montgreenan by Sir Robert Montgomerie of Skelmorlie (better known for building the Skelmorlie Aisle as his burial place) on 1 August 1586, as a direct result of the assassination of the Fourth Earl of Eglinton at Stewarton in April of that year. John Smith in 1895 recorded that in the Montgreenan Woods are the remains of a Bishop's Palace, sometimes called a castle, of which little appears to be known. Not far away is part of an ancient gateway, and just South of the house there are the remains of a mound which once contained an ice-house. All that remains at this site is a small piece of wall at the side of the stream, and a slight hollow, partly surrounded by a bank formed by the rubbish of the old walls. Mr R. Glasgow, the proprietor, stated in the 1856 Name Book of the Ordnance Survey that the dwelling probably became disused in 1680, when the last Cunninghame of Montgreenan was forfeited. Much of its remains were removed about 1765 by the previous proprietor, Mr Stevenson, to build a house at Kilwinning. A visit in 1956 recorded that in the thick vegetation were traces of buildings, enclosed by a wall on the West and South sides. The details were unclear, but the castle plan seemed to be that of a courtyard with internal buildings on all sides except perhaps the East, where there is a wall running along the edge of the Lugton Water. Such a building design with a central courtyard was called a 'Place' or 'Palace' due to its construction, not its size. All the walls were merely heaps of rubble, and the drystone "courtyard" wall seemed to be of later construction than the internal remains, acting as a revetment to the mass of rubble inside. This wall was 1.4m high. No clear evidence was encountered for this being a "Bishop's Palace". About 65.0m to the South was a mound, 1.5m high, which had been cut through by a track, and may be the ice-house referred to by Smith, although no stone-work exists. No trace of a gateway was found, although the possible entrance shown on OS plan may be the gateway referred to.