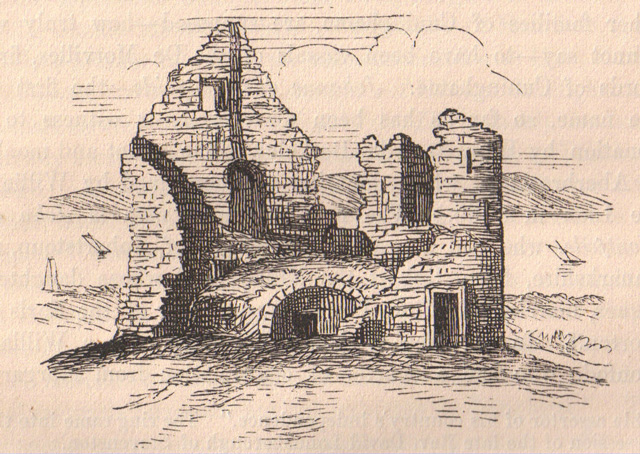 Location: Ardrossan, North Ayrshire, Scotland.
Built: 16th century.
Condition: Mostly demolished.
Ownership / Access: Private.
Notes: The remains of the old castle of Montfode or Monfode lies close to west of the town of Ardrossan and 1.5 miles south-west of West Kilbride in North Ayrshire, Scotland, above the Montfode Braes (above the raised beach cliffs), in the old Barony of Kilbride. It is a 'B' listed scheduled ancient monument. The castle ruins are clearly visible from the A78 Ardrossan bypass. The name 'Montfode' derives from the old Norman family of that name, the Montfodes of that Ilk. The Barony was originally held by the powerful De Morville family and the Montfodes would have been their vassals. The castle lies close to the Montfode Burn.The castle was mostly demolished in the early 19th century to provide stone to build a dam and probably buildings at Montfode Farm where the water was used to power a threshing mill. The dam and threshing mill building still exists and the mill or gathering pond site is now a wet field; the source of the water is not clear. Fortunately a Mr Weir of Kirkhall made a drawing of the castle before it was robbed of stone for the dam construction and this was used by Paterson in his drawing of the castle as illustrated here. The 1769 map of the castle does not show it as a ruin and the shape is rectangular. The remaining fragment of this baronial castle consists of a single round tower standing with slits and a gun-loop to around 8m with an interior diameter of 2m, originally three or four storeys high and a portion of walling about 7m high and 2m long. The doorway on the eastern side has moulded stone surround. the tower and wall are of rubble masonry and 0.7m thick. The position of this tower, situated upon an exterior angle, may indicate that the building was of a Z-plan construction. Paterson's describes the castle as having been a large oblong building. He sees the tower as having been the access to the other floors. The 1769 map shows a replacement for the castle, Montfode House, situated at the site of the present farm. Roy's map of 1747 indicated the house with a square enclosure wall incorporating the habitation.

How To Get To Montfode Castle (Map):