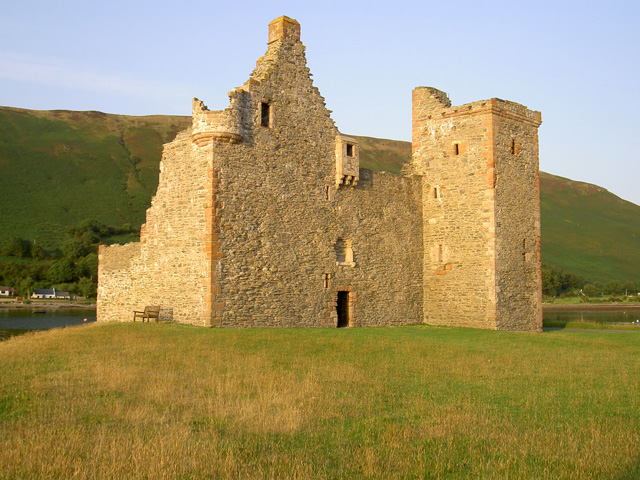 Location: Lochranza, Isle of Arran, Scotland.
Built: 16th century.
Condition: Ruined.
Ownership / Access: Historic Scotland.
Opening times: Check their website for more info.
Price of admission: Check their website for more info.
Notes: Lochranza Castle is an L-plan tower house situated on a promontory in Lochranza, on the north of the Isle of Arran in Scotland. Most of the castle was built in the 16th century. The castle dates from the 13th century when it was owned by the MacSweens. In 1262, King Alexander III granted the castle and its lands to Walter Stewart, the Earl of Menteith. It is believed that Robert the Bruce landed at Lochranza in 1306 on his return from Ireland to claim the Scottish throne. By 1371, the castle was the property of Robert II. It is thought that at this time it was used as a royal hunting lodge. During the 1490s, James IV used the castle in his campaign against the Lord of the Isles and the Clan MacDonald. In 1614 it was occupied by James VI and in the 1650s it was used by Cromwell. By 1705, Lochranza Castle was the property of the Hamilton family, after it was purchased by the Duchess of Hamilton. The Hamiltons had owned other estates on the Isle of Arran so eventually sold it to the Blackwood-Davidson family who used it as their principal seat. During the 18th century, the castle fell into disuse and was abandoned. The castle is now in the care of Historic Scotland.

How To Get To Lochranza Castle (Map):