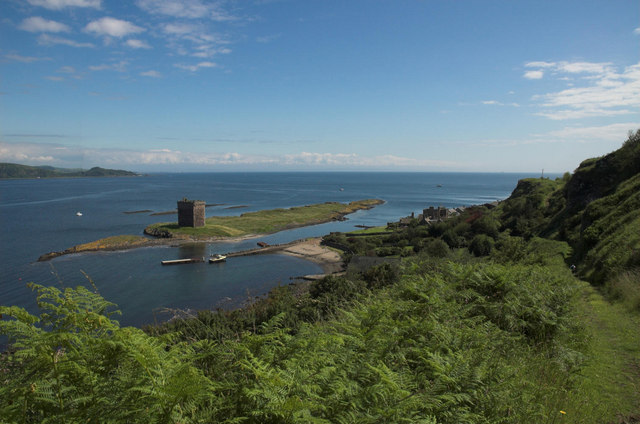 Location: Little Cumbrae, North Ayrshire, Scotland.
Built: 16th Century.
Condition: Ruin.
Ownership / Access: Private .
Notes: Little Cumbrae Castle sits on Allimturrail (the islet of the noble's tower) or Castle Island, a small tidal island, situated off the east coast of Little Cumbrae, in the Firth of Clyde.Little Cumbrae was recorded as Kumbrey circa 1300, Cumbraye circa 1330 and Litill Comeray in 1515. The present small square castle of Little or Lesser Cumbrae was built by Lord Eglinton in the 16th century, possibly as a base to prevent deer and rabbit poaching; both animals being very common on the main island of Little Cumbrae at the time. The Hunters of Hunterston were for centuries the Hereditary Foresters of the island and King's lands of Little Cumbrae, however Hugh, Earl of Eglinton was made keeper of the island in 1515 because the Privy Council believed that Robert Hunter did not have the means to ...resist ye personis yat waistis the samyn without suple and help.[6] This arrangement lasted for fifteen years and in 1527 Robert Hunter obtained a 'Royal Charter of the Island', but soon after the Crown sold it to the Earl of Eglinton, who in 1555 had his rights confirmed by James V. Walter Stewart (1293-1326), who had married Marjorie Bruce, daughter of King Robert the Bruce, may have previously built a castle or hunting lodge here and his son, Robert II spent time here hunting the deer, however no local traditions about the site of the old castle have survived. The "Auld Castle" was occupied during hunting expeditions by Robert II in 1375 and 1384. King Robert III also visited Little Cumbrae Castle.