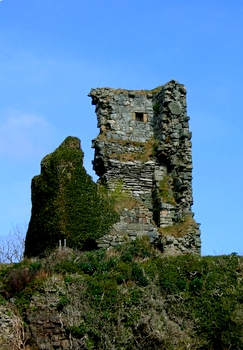 Location: Kildonan, Isle of Arran, Scotland.
Built: 13th century.
Condition: Ruins.
Ownership / Access: Private.
Notes: Kildonan Castle stands in the small village of Kildonan on the southern coast of the Isle of Arran in Scotland. The castle's name is derived from the name of a former resident, Saint Donan, who is said to be buried on the island. It was built in the 13th century by the MacDonalds, the Lords of the Isles. The castle stands on the cliffs, overlooking the island of Pladda and the entrance to the Firth of Clyde. It was built to defend against enemies attacking through the Firth. It was used as a hunting lodge by the Kings of Scotland, including Robert III, when the island belonged to the crown. The castle became the property of the Earls of Arran in 1544. Kildonan castle stands out on the old raised beach behind and above the village. It was once, with Lochranza Castle and Brodick Castle, one of three fortresses guarding Arran's strategically important position in the approaches to the Clyde. Today's Kildonan Castle is only a shadow of its former self, but still reflects its origins as a 13th Century keep. The castle was originally built by the Lords of the Isles, but by 1406 was in the ownership of Robert III, who in that year passed it on to his illegitimate son, John Stewart of Ardgowan. In 1544 it was acquired by the Hamilton family, the Earls of Arran. Kildonan Castle has long been ivy clad and unstable, making close examination a dangerous proposition. It also stands in the garden of a house, meaning that it can only be seen from a nearby right of way leading to the beach. Not far from the castle is an increasingly ruinous lookout tower, a relic from Kildonan's days as the location of Arran's only Coastguard station, which moved to Lamlash in 1981.