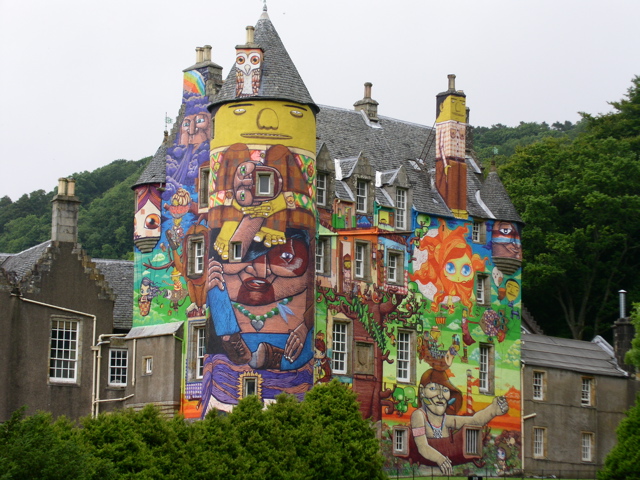 Location: Fairlie, North Ayrshire, Scotland.
Built: 13th century.
Condition: Intact.
Ownership / Access: Boyle family.
Opening times: Check their website for more info.
Price of admission: Check their website for more info.
Notes: Kelburn Castle is a large house near Fairlie, North Ayrshire, Scotland. It is the seat of the Earl of Glasgow. Originally built in the thirteenth century (the original keep forms the core of the house) it was remodelled in the sixteenth century. In 1700 the first Earl made further extensions to the house in a manner not unlike a French chateau which is virtually how it appears today. In 1977 the house and grounds opened to the public as a country park. It is one of the oldest castles in Scotland and has been continuously inhabited by the same family for longer than any other. The castle is protected as a category A listed building, while the grounds are included in the Inventory of Gardens and Designed Landscapes in Scotland.In 2007 experts told the owners of Kelburn Castle that its concrete facing would eventually need to be replaced to avoid further damage to the stonework. At the suggestion of his children, Lord Glasgow invited four Brazilian graffiti artists to paint the walls. Historic Scotland agreed to the project, on the basis that the graffiti would be removed when the castle was re-harled. The project was featured on the BBC television programme The Culture Show. Also in 2007, Kelburn featured in another BBC programme, Crisis at the Castle which documented the financial problems of running the castle. In September 2010 it was reported that Historic Scotland were putting pressure on Lord Glasgow to remove the graffiti, although this was later denied by both parties. In August 2011 it was reported that the Earl had formally written to Historic Scotland asking permission to keep the graffiti as a permanent feature.

How To Get To Kelburn Castle (Map):