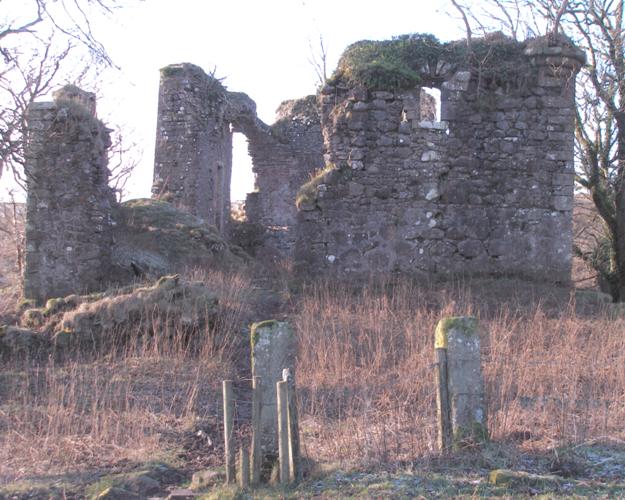 Location: Kilbirnie, North Ayrshire, Scotland.
Built: 15th century,
Condition: Ruin.
Ownership / Access: Private,
Notes: Glengarnock Castle is one of the ancient ruined fortifications of Ayrshire. Its keep is located on a remote rocky promontory overlooking the River Garnock about 2 miles (3.2 km) north of the town of Kilbirnie in North Ayrshire, Scotland. There is no clear account of when this was erected or by whom, but it may have been built by the Cunningham (or Cunninghame) family or by the Riddels who preceded them. The Barony of Glengarnock is one of three feudal baronies which together form the parish of Kilbirnie in the district of Cunningham which lies in north Ayrshire. The River Garnock flows through the village of the same name 4 kilometres (2.5 mi) to the south, but the name Glen Garnock applies more specifically to the ravine at Glengarnock Castle. The ruins were stabilized in 1841 by William Cochran Patrick of Ladyland, following a partial collapse in a storm of 1839. Dobie records that .."foundations, where undermined, have been secured; wasted portions of the walls taken down and substantially restored, the whole of which have been carefully pointed with mortar; while the interior has been cleared of the rubbish and soil accumulated during more than a hundred years of abandonment and degradation"; the structure still continues to deteriorate although without these repairs little would have survived.