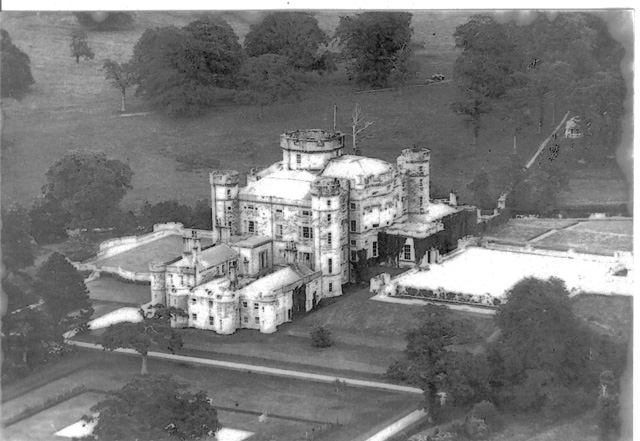 Location: Kilwinning, North Ayrshire, Scotland.
Built: 19th century.
Condition: Ruin.
Ownership / Access: North Ayrshire Council.
Notes: Eglinton Castle was a large Gothic castellated mansion in Kilwinning, North Ayrshire, Scotland. The ancient seat of the Earls of Eglinton, it is located just south of the town of Kilwinning. The original Eglinton Castle was burnt by the Earl of Glencairn in 1528. The current castle was built between 1797 and 1802 in Gothic castellated style dominated by a central 100-foot (30 m) large round keep and four 70-foot (21 m) outer towers, it was second only to Culzean Castle in appearance and grandeur. The foundation stone of the new Eglinton Castle in Kilwinning was laid in 1797, the 12th Earl of Eglinton, was proud to have the ceremony performed by Alexander Hamilton of Grange, grandfather of the American Hero Alexander Hamilton. Aitken's 1823 map showing the position of the castle and other details John Ainslie's 1790 map showing formal pleasure or possibly kitchen gardens on the opposite side of the Lugton Water to the castle Eglinton was the most notable post-Adam Georgian castle in Ayrshire. Amongst many items of interest, the castle contained a chair built from the oak timbers of Alloway kirk and the back of the chair was inlaid with a brass plaque which bore the whole of Burns' poem Tam o' Shanter. This was sold at an auction in 1925. The previous Eglington castle (sic) was described circa 1563-1566 as a fare castell, but noo strength againsts any power. An escape tunnel is said to run from the old castle to the area of the rockery on the castle lawns. The appearance of the old waterfall may have inspired this story as it looks like a sealed doorway. The total acreage of the Earl of Eglinton's holdings was 34,716 Scots Acres (1 Scots acre = 1.5 English Acres) in 1788. This included Little Cumbrae, and lands at Southannan and Eaglesham (Polnoon). The original castle of Eglinton may have been near Kidsneuk, Bogside (NS 309 409) where a substantial earth mound or motte stands and excavated pottery was found tentatively dating the site to the thirteenth century. The Montgomerys' first holdings were the Barony of Eaglesham and its Castle of Polnoon. In 1691 the 'Hearth Tax for Ayrshire' records show 25 hearths in use, the highest number for a single dwelling in Ayrshire. It is noted that the earl had not paid the tax. The earl's house in Kilwinning, Easter Chambers or the old abbot's dwelling, had 15 hearths. Thirty-seven other dwellings were listed within the barony of Eglinton. The stables were built from stones taken from the Easter Chambers of Kilwinning Abbey; being the Abbots lodgings and later that of the Earls of Eglinton. In 1784, over a period of four months, the building was demolished and the stones were taken to Eglinton. The construction of the new castle was not universally accepted as beneficial; Fullarton records that "The hoary grandeur of the old fortalice lay deeply buried amid the dense groves of immemorial growth which closely invested and obscured it; no innovating projects of improvement, nor change of any kind, had ever been permitted to disturb the sanctity of its seclusion, or to ruffle the feelings even of the most fastiduous worshipper of things as they are, or, more properly perhaps, chance to be". The castle is said to have had a moat.

How To Get To Eglinton Castle (Map):