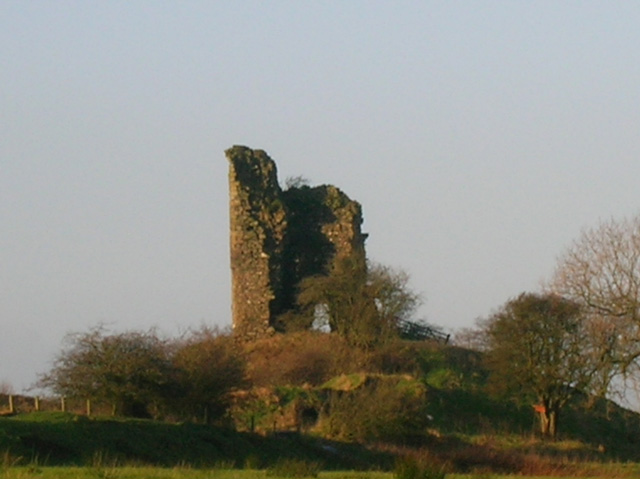 Location: Torranyard, North Ayrshire, Scotland.
Built: 16th century.
Condition: Ruined.
Ownership / Access: Auchenharvie Farm. Cunningham Clan.
Notes: Auchenharvie Castle is a ruined castle near Torranyard on the A 736 Glasgow to Irvine road. Burnhouse lies to the north and Irvine to the south. It lies in North Ayrshire, Scotland. The ruins still stand in a prominent and strongly defensible position at Auchenharvie Farm near Torranyard; the site has been much altered by quarrying. Previously the castle was known as Achin-Hervy, Awthinharye in c 1564 (Rollie 1980), Auchinbervy by Moll in 1745, Achenhay (1775 & 1807), and Auchenhowy is used by Ainslie in 1821. Auchenharvie has long been a ruin, shown as such as far back as 1604 - 08 by Timothy Pont. It was too small and the area of the mound also so restricted that its conversion into a more commodious and comfortable dwelling were not practicable. The corbels of the parapet are unusual in that they project less than usual and this links Auchenharvie with the work at Law Castle and Barr Castle. The castle is built from whinstone with freestone corners. A good deal remains of this typical tower castle, which has been ruinous since the 1770s, with indications of the barrel roof vaulting, side tower, ornate sandstone ornamentation, etc. Some very basic consolidation works have been carried out. Uncommon orchids have been recorded as growing on the motte. It is known from the pollen record at Bloak Moss that extensive clearances took place here in the fifth or sixth centuries AD and such a site would have been of great strategic importance to these early settlers, standing out as it does, like an island above the mosses.