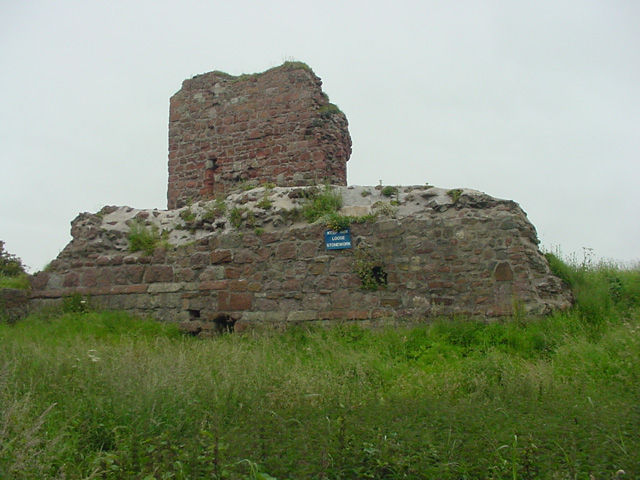 Location: Ardrossan, Ayrshire, Scotland.
Built: 15th century.
Condition: Ruin.
Ownership / Access: --
Notes: Ardrossan Castle is situated on the west coast of Scotland in the town of Ardrossan, Ayrshire. The castle, defended by a moat, stands on a ridge above the town. There is a keep dating from the fifteenth century, and a vaulted range containing a kitchen and cellars. In a deep passageway there is a well. Part of the keep remains up to the corbels of the parapet, but it is in ruins. The original castle, owned by Clan Barclay, was partly destroyed during the Wars of Scottish Independence. This event, in which the English garrison were slaughtered, became known as "Wallace's Larder," a name which is still applied to the remaining vaults. Rebuilt by Clan Montgomery in the 15th century, Ardrossan later fell into disuse and was partially demolished by the soldiers of Oliver Cromwell in the 17th century who used the stones to help construct the Ayr Citadel. The castle remained until 1648, when Oliver Cromwell's troops destroyed it, removing much of the stone and taking it to Ayr to build a fort, called the Ayr Citadel, there. The ruins of this castle still stand, but are in hazardous condition.

How To Get To Ardrossan Castle (Map):