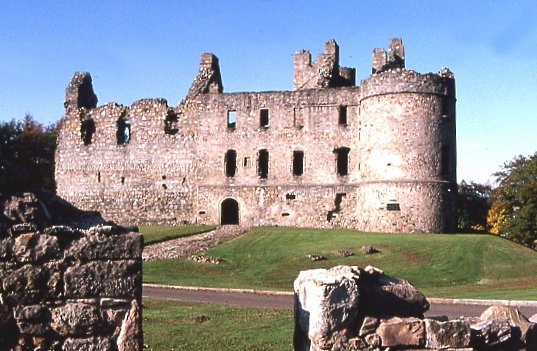 Location: Dufftown, Moray, Scotland.
Built: 12th century.
Condition: Ruined.
Ownership / Access: Historic Scotland.
Opening times: Check their website for more info.
Price of admission: Check their website for more info.
Notes: Balvenie Castle is a ruined castle near Dufftown in the Moray region of Scotland. Originally known as Mortlach, it was built in the 12th century by a branch of the powerful Comyn family (the Black Comyns) and extended and altered in the 15th and 16th centuries. The castle fell out of use in the early 14th century when the Comyns were reduced by Robert the Bruce. At some point in the 14th century the castle and the lordship of Balvenie passed into the earldom of Douglas. Nothing is documented as to how the Black Douglases first acquired the castle but the most likely account is that it came with the marriage of the heiress Joanna Murray to Archibald 'the Grim' , 3rd Earl of Douglas in 1362. His son and successor Archibald Douglas, 4th Earl of Douglas granted his younger brother James Douglas, 7th Earl of Douglas, latterly known as James 'the Gross' , the lordship of Balvenie in 1408. James's main residence was at Abercorn Castle, a coastal fortress to the west of Edinburgh and Balvenie Castle's use was as temporary accommodation when the need arose. In 1440, William Douglas, 6th Earl of Douglas was murdered by King James II of Scotland, and the elderly James the Gross, possibly complicit to the murder, became the 7th earl. James immediately provided the lordship of Balvenie with its castle to his youngest son, John Douglas, Lord of Balvenie. Earl James's death in 1443 signaled a resumption of the hostility between the royal Stewarts and the Black Douglases. The Battle of Arkinholm in May 1455 saw the defeat of this, the main Douglas line by an army loyal to James II. All of their lands and titles were forfeited to the Crown, including Balvenie Castle. King James divided up the estates among his supporters, which included the Douglas Earl of Angus and provided Balvenie Castle to Sir John Stewart, who later became the first Earl of Atholl. Balvenie Castle served as a garrison during the Jacobite rebellion. It was abandoned in 1720s but was briefly garrisoned by Government troops in 1746. Today, the remains of the castle are managed by Historic Scotland; however, ownership continues in private hands. The current owner is Jeremy Duncan Nicholson, Baron of Balvenie, who resides in Atlanta, Georgia in the U.S.A. The castle is open to the public from the beginning of April to the end of September. Balvenie whisky is produced by William Grant & Sons at the Balvenie distillery down the hill from the castle.

How To Get To Balvenie Castle (Map):